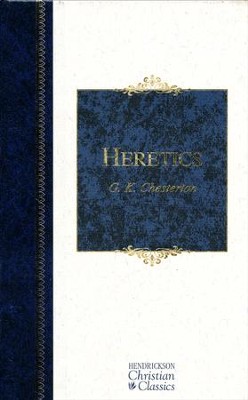 ▼▲
Heretics is the companion volume to the previously published Orthodoxy in Hendrickson's Christian Classics series. In Heretics G. K. Chesterton unmasks the heresies of contemporary thinking by exposing the faulty thinking of popular notions, especially apparent in the arts. An often overlooked book that contains some of Chesterton's strongest writing, the author takes on the "heresies" of modern thought, such as negativism, relativism, neo-paganism, puritanism, aestheticism, and individualism. The book includes one of his best essays: "On Certain Modern Writers and the Institution of Family."

This 1905 collection of articles focuses on the era's "heretics:" those who pride themselves on their superiority to conservative views. Chesterton's companion volume to Orthodoxy asseses such artists and writers as Kipling, Shaw, Wells, and Whistler with the author's characteristic wisdom and good humor.

G. K. Chesterton (1874-1936) was a prolific and gifted writer in virtually every area of literature. During his life he published 69 books and at least another ten have been published after his death. Many of those books are still in print. Chesterton was one of the spiritual influences on C. S. Lewis.

The history of Christian theology is in large part a history of heresies, because Jesus and the claims he made . . . seemed incredible," writes the author. Heresies presents "the story of how succeeding generations of Christians through almost twenty centuries have tried to understand, trust, and obey Jesus Christ." Particularly concerned with christology and trinitarianism, the author calls on the four major creeds of the church--Apostles', Nicene, Athanasian, and Chalcedonian--to separate orthodoxy from heresy. He acknowledges that heresy has done much more than confuse and divide the church. It has also helped the church to classify orthodoxy. Just as heresy served this purpose historically, so it serves this purpose pedagogically in Heresies.

This volume presents a clarion call to evangelicals to preserve tenaciously "the faith once delivered to the saints." Frank E. James III wrote in the Journal of the Evangelical Theological Society: "Brown deserves to be commended not only for his insightful scholarship and his readable style but also and more importantly for providing a sorely-needed jab to the soft underbelly of modern evangelicalism."

G. K. Chesterton (1874-1936) was one of C. S. Lewis' primary mentors in apologetics, and an influence even in his conversion. Novelist, poet, essayist, and journalist, Chesterton was perhaps best known for his Father Brown detective stories. He produced more than 100 volumes in his lifetime, including biographies of St. Francis of Assisi and St. Thomas Aquinas. His Everlasting Man, which set out a Christian outline of history, was one of the factors that wore down Lewis' resistance to Christianity. Chesteron was one of the first defenders of orthodoxy to use humor as a weapon. Perhaps more important was his use of reason to defend faith.

▼▲
I'm the author/artist and I want to review Heretics (Hendrickson Christian Classics).
Back