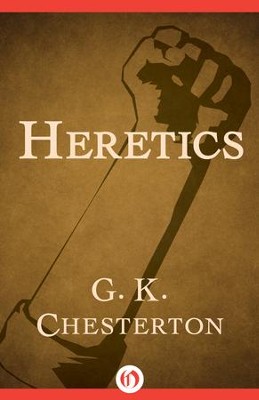 ▼▲
The opening salvo in G. K. Chesterton’s war against vagueness, affectation, and group think in life and art

Part literary criticism, part jeremiad, and part metaphysical inquiry, Heretics is G. K. Chesterton’s groundbreaking attempt to cull the values, belief systems, and moral peccadilloes of his day. The twenty articles and essays included in this seminal work shed a brilliant light on the most profound mysteries of human nature.

From the works of H. G. Wells, George Bernard Shaw, and Rudyard Kipling to "The Fallacy of the Young Nation" and "The Mildness of the Yellow Press," Chesterton casts a critical eye on the prevailing attitudes of the early twentieth century. He is at the height of his lucidity and sardonic power in Heretics, formulating a highly influential worldview that he would continue to develop in the acclaimed companion volume, Orthodoxy.

▼▲
G. K. Chesterton (1874–1936) was a prolific English journalist and author best known for his mystery series featuring the priest-detective Father Brown and for the metaphysical thriller The Man Who Was Thursday. Baptized into the Church of England, Chesterton underwent a crisis of faith as a young man and became fascinated with the occult. He eventually converted to Roman Catholicism and published some of Christianity’s most influential apologetics, including Heretics and Orthodoxy.

▼▲
I'm the author/artist and I want to review Heretics - eBook.
Back
×
Back
×