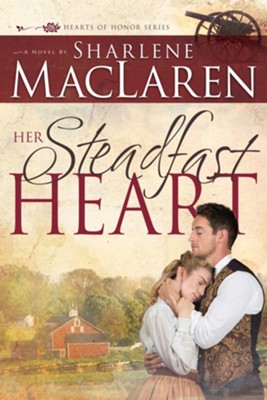 ▼▲
Widower Joey Fuller fights for the Union, leaving his four rambunctious children with nannies&hellip;who keep quitting. Joey’s solution? Advertise for a temporary wife to take care of his family until he musters out.
Faith Haviland is desperate to escape heartbreak and a brute whose intentions are clearly wicked. Joey’s "Wife Needed" ad seems to be the answer to a prayer.
Will Faith live up to her name when Joey’s children torment her with their mischief? And is this strange marriage part of God’s plan?

▼▲
Born and raised in west Michigan, Sharlene MacLaren attended Spring Arbor University. Upon graduating with an education degree in 1971, she taught second grade for two years, then accepted an invitation to travel internationally for a year with a singing ensemble. After traveling for a year, she returned to her teaching job, then in 1975, she reunited with her childhood sweetheart, and they married that very December. They have raised two lovely daughters, both of whom are now happily married and enjoying their own families. Retired in 2003 after thirty-one years of teaching, Shar loves to read, sing, travel, and spend time with her family—in particular, her adorable grandchildren!
Shar has always enjoyed writing, and her high school classmates eagerly read and passed around her short stories. In the early 2000s, Shar felt God’s call upon her heart to take her writing pleasures a step further, so in 2006, she signed a contract with Whitaker House for her first faith-based novel, Through Every Storm, thereby launching her professional writing career. With almost two dozen published novels now gracing store shelves and being sold online, Shar gives God all the glory.
Shar’s novels have won numerous awards. Most recently, Their Daring Hearts was named a 2018 Top Pick by Romantic Times and A Love to Behold was voted "Book of the Year" in 2019 by Interviews & Reviews. Her Steadfast Heart is the second book in Shar’s Hearts of Honor series. The first one, Her Rebel Heart, centers on Joey’s brother Jack and his wife Cristina, and the third, Her Guarded Heart, releasing in January 2022, features Anna Hanson, a widowed mother, and the youngest Fuller brother, Jesse.
Shar has done numerous countrywide book signings and has participated in several interviews on television and radio. She loves to speak for community organizations, libraries, church groups, and women’s conferences. In her church, she is active in women’s ministries, regularly facilitating Bible studies and other events. Shar and her husband, Cecil, live in Spring Lake, Michigan, with their beautiful white collie, Peyton.
Shar loves hearing from her readers. If you wish to contact her as a potential speaker or would simply like to chat with her, please send her an e-mail at SharleneMacLaren@Yahoo.com. She will do her best to answer in a timely manner.
Additional resources:
http://www.SharleneMacLaren.com
https://www.instagram.com/sharlenemaclaren
https://twitter.com/sharzy_lu?lang=en
https://www.facebook.com/groups/43124814557 (Sharlene MacLaren & Friends)
https://www.whitakerhouse.com/book-authors/sharlene-maclaren

▼▲
I'm the author/artist and I want to review Her Steadfast Heart, #2.
Back