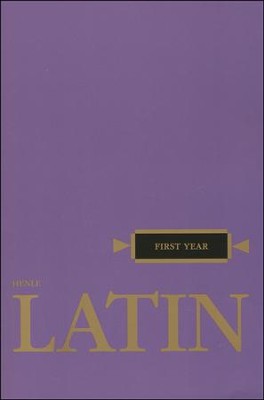 ▼▲
Originally published in 1945, this tried-and-true Latin curriculum has lost none of its efficiency over the years! Rigorous and straightforward in its instructional style, Henle Latin is structured around the sold-separately Latin Grammar reference text, which provides students with the grammar and syntax information they'll need, in conjunction with the Henle textbooks.

The text is written directly to the student, and reflects the direct instructional style of the time in which it was written; many black and white photographs and art reproductions are also included. Texts include Christian and Classical content (though Protestant homeschoolers may wish to note that the Christian content is sometimes from a very Catholic perspective), as well as information on Roman and American history, with an emphasis on the importance of Christian values & virtues.

514 pages, softcover with Latin-English/English-Latin glossary. First Year Latin may be used with students in grades 5-6 who have previously completed introductory Latin courses, or for students in grades 7 & up without a Latin background. Initially written for one volume per each year of high school.

Humanistic insight and linguistic training are the goals of the Henle Latin Series from Loyola Press, an integrated four-year Latin course. Time-tested and teacher endorsed, this comprehensive program is designed to lead the student systematcially through the fundamentals of the language itself and on to an appreciation of selected classic texts.

▼▲
I'm the author/artist and I want to review Henle Latin 1 Text: First Year Latin.
Back