Skip to main content
Is Hell for Real or Does Everyone Go to Heaven?
By: Timothy Keller, R. Albert Mohler Jr., J.I. Packer
Stock No: WW494621 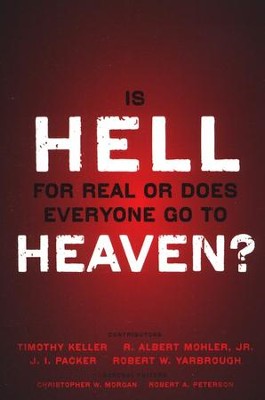 Is Hell for Real or Does Everyone Go to Heaven?

▼▲
The traditional, biblically based view of Hell is again being questioned by people both in and outside the walls of the church. How could Jesus, the one who died for the sins of the world, condemn millions of people to eternal torment because they didn't believe the right things about him? Doesn't God's goodness make it impossible for him to commit such an act of seemingly vengeful judgment? Isn't eternal punishment disproportionate, and therefore unjust, in light of the temporal nature of all human failings?

Can't Jesus' love overcome all who resist him, even the most unrepentant of sinners? In light of difficult questions like these---and in part as a response to the controversy stirred up by Rob Bell's Love Wins---this book affirms with clarity and even-handedness the historic Christian doctrine regarding the final destiny of the unsaved. Together, the contributors explore the biblical and theological reasons for continuing to believe in hell, revealing along the way some of the consequences for the church when it loses sight of this doctrine.

Is Hell for Real or Does Everyone Go to Heaven? answers some of today's toughest questions with deep biblical insights and an irenic tone. This book is ideal for group studies on the topic or for individuals looking for a quick way to better understand the discussion.

▼▲
Both outside and inside of the church, many people today are increasingly uncomfortable with hell. They wonder:How could it be fair to punish anyone for eternity?Will Jesus really condemn millions simply for not believing the right things about him? Isn’t God a God of love, not vengeance?The top-notch contributors to Is Hell for Real or Does Everyone Go to Heaven? tackle these and other questions with an even-handed survey of the Bible’s teaching on this difficult subject. Together, they present a careful case for upholding hell, showing that it remains central to a right understanding of God, the gospel, humanity, and God’s purposes for the world.Useful for group discussion or individual study, Is Hell for Real or Does Everyone Go to Heaven? provides an accessible introduction to the historic Christian doctrine of hell.

Timothy Keller is the New York Times bestselling author of The Reason for God, The Meaning of Marriage, The Prodigal God, Jesus the King, and The Prodigal Prophet.

R. Albert Mohler Jr. has been called "one of America's most influential evangelicals" (Economist) and the "reigning intellectual of the evangelical movement" (Time.com). The president of the Southern Baptist Theological Seminary, he writes a popular blog and a regular commentary, available at AlbertMohler.com, and hosts two podcasts: The Briefing and Thinking in Public. He is the author of many books, including We Cannot Be Silent and The Prayer that Turns the World Upside Down, and has appeared in the New York Times, the Wall Street Journal, USA Today, and on programs such as NBC's Today, ABC's Good Morning America, and PBS NewsHour with Jim Lehrer. He and his wife, Mary, live in Louisville, Kentucky.

Robert A. Peterson was professor of systematic theology at Covenant Theological Seminary in St. Louis, Missouri. He is author or editor of twenty books, including Salvation Accomplished by the Son: The Work of Christ (Crossway, 2012), Our Secure Salvation: Preservation and Apostasy (P&R Publishing, 2009), and, coedited with Christopher Morgan, Hell Under Fire (Zondervan, 2004).

▼▲
Is Hell for Real or Does Everyone Go to Heaven?, edited by Christopher Morgan and Robert Peterson, includes essays by Timothy Keller, Al Mohler, J.I. Packer, and Robert Yarbrough. It's a factual and informative book that covers topics relating to Hell and what happens after we die. The contributing authors discuss different perspectives on Hell in today's culture versus what the Bible has to say about it. Eternal damnation and Hell have never been easy topics to talk about, but these authors combine to discuss the truth about it. All the authors view Hell as a real place with real consequences.

The sections in this book include a look at how perspectives of Hell have changed from Jesus' time, as well as views of what Jesus said and the Bible's depiction of Hell. The big question of, "Does everyone go to heaven?" is also answered. Each topic is covered extensively and in terms readers don't need a Ph.D. to understand. All of the authors do an excellent job of teaching the concepts of damnation, eternity, and judgment. They also have biblical references to support their arguments. The authors take their time and explain each concept in a thoughtful and provoking manner.

Each section has a lesson to take away that can be applied to everyone's faith walk. The appendix includes advice from Timothy Keller on how to teach or preach about Hell in today's culture. Today's culture tends to think that God is too loving to send people to Hell, even if they do not believe in God. Keller says, "We must explain how a God without wrath is a God without love" (p. 79). God is not only a loving father, but a righteous judge. Romans 3:5-6 says, "But if our unrighteousness brings out God's righteousness more clearly, what shall we say? That God is unjust in bringing his wrath on us? (I am using a human argument.) Certainly not! If that were so, how could God judge the world?" (NIV). God has every right to judge us; He created us. With the blackness of sin, God shines all the brighter.

Overall, this book is a great tool for teaching, provoking, and informing people about the realities of Hell. This book could be used for devotional readings, small group meetings, Bible studies, or as a preaching tool. The ideas in this book are helpful and convicting. Hell is real, and this book does everything possible to prove it. I would recommend this book to anyone who has any doubts about Hell or is simply curious. This book is helpful, eye opening, and insightful. It will make the reader reevaluate his views on salvation, condemnation, and eternity. Kailey Traylor, www.ChristianBookPreviews.com

▼▲
I'm the author/artist and I want to review Is Hell for Real or Does Everyone Go to Heaven?.
Back
Back