Skip to main content
BIBLE SALE OF THE SEASON: For a Limited Time ~ Save on over 1,100 Bibles!
Heirlooms
By: Sandra Byrd
Stock No: WW426885 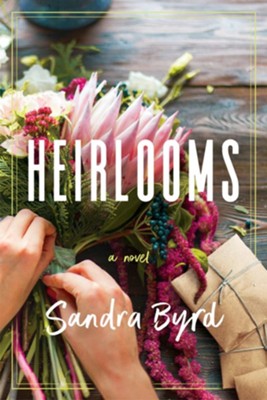 After Cassidy's grandmother Helen dies, Cassidy inherits the family home and a deathbed request to ask Grace, granddaughter of Helen's lifelong friend, to sort through a locked hope chest. As Cassidy and Grace dig into the past, they unearth startling revelations and their grandmothers' long-held secret. Will they find inspiration to take risks and change their own lives?

▼▲
Answering a woman’s desperate call for help, young Navy widow Helen Devries opens her Whidbey Island home as a refuge to Choi Eunhee. As they bond over common losses and a delicate, potentially devastating secret, their friendship spans the remainder of their lives.

After losing her mother, Cassidy Quinn spent her childhood summers with her gran, Helen, at her farmhouse. Nourished by her grandmother’s love and encouragement, Cassidy discovers a passion that she hopes will bloom into a career. But after Helen passes, Cassidy learns that her home and garden have fallen into serious disrepair. Worse, a looming tax debt threatens her inheritance. Facing the loss of her legacy and in need of allies and ideas, Cassidy reaches out to Nick, her former love, despite the complicated emotions brought by having him back in her life.

Cassidy inherits not only the family home but a task, spoken with her grandmother’s final breaths: ask Grace Kim—Eunhee’s granddaughter—to help sort through the contents of the locked hope chest in the attic. As she and Grace dig into the past, they unearth their grandmothers’ long-held secret and more. Each startling revelation reshapes their understanding of their grandmothers and ultimately inspires the courage to take risks and make changes to own their lives.

Set in both modern-day and midcentury Whidbey Island, Washington, this dual-narrative story of four women—grandmothers and granddaughters—intertwines across generations to explore the secrets we keep, the love we pass down, and the heirlooms we inherit from a well-lived life.

▼▲
Starred review. Bestselling author Sandra Byrd blends romance, laughter, community and family secrets in her novel Heirlooms, a delightful story of uplifting female friendships. . . . With warmth and sensitivity, Heirlooms examines the challenges faced by immigrants living in the U.S., and the difficulties for women seeking health care and financial security for both themselves and their children throughout American history. Readers will marvel at the strength found in community and the deep connections that can exist between generations.
Starred Review. Four women discover that family comes in many forms in this gorgeous saga from Byrd (Lady of a Thousand Treasures). . . . Lush and vivid prose brings the setting to life (“The white-petaled daisies and their cousins, fainting gerberas, competed in the midsummer beauty pageant for the nearby bachelor’s buttons’ affections”), and Helen and Eunhee’s friendship will melt hearts. This is a gem.
Starred review. Byrd (“Daughters of Hampshire” series) delivers a crossover hit for fans of Susie Finkbeiner and Cynthia Ruchti. This is women’s fiction as it is meant to be written with intriguing characters making decisions that ripple through generations. This is also a timely pick featuring the story of an Asian immigrant and her descendants facing both struggles and triumphs while creating community in the U.S.

▼▲
I'm the author/artist and I want to review Heirlooms.
Back
Back