Skip to main content
THE MEGA CHRISTMAS SALE: Save up to 85% off through 10/19 >
Hebrews-Revelation, Revised: The Expositor's Bible Commentary
By: Tremper Longman III, David E. Garland
Stock No: WW6894X 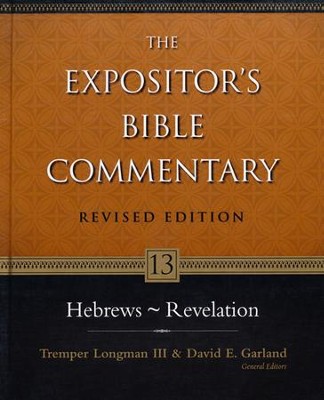 ▼▲
Continuing a Gold Medallion Award-winning legacy, this completely revised edition of The Expositor’s Bible Commentary series puts world-class biblical scholarship in your hands. Based on the original twelve-volume set that has become a staple in college and seminary libraries and pastors’ studies worldwide, this new thirteen-volume edition marshals the most current evangelical scholarship and resources. You’ll find up-to-date information grounded in the same unchanging commitment to the divine inspiration, complete trustworthiness, and full authority of the Bible.Of the fifty-six contributors, thirty of them are new. Reflecting the Expositor’s Bible Commentary international and cross-denominational approach, they come from the United States, Canada, England, Scotland, Australia, and New Zealand, and from a broad diversity of churches, including Anglican, Baptist, Brethren, Methodist, Nazarene, Presbyterian, and Reformed.The Expositor’s Bible Commentary uses the complete New International Version for its English text, but it also refers freely to other translations and to the original languages. For each book of the Bible, the thoroughly revised features consist of:A comprehensive introduction A short and precise bibliography A detailed outline Insightful exposition of passages and verses Overviews of sections of Scripture to illumine the big picture Occasional reflections to give more detail on important issues Notes on textual questions and special problems, placed close to the text in question Transliteration and translation of Hebrew and Greek words, enabling readers to understand even the more technical notes A balanced and respectful approach toward marked differences of opinion


The Reverend Dr. Dick France was a New Testament scholar and Aglican cleric. He was Principal of Wycliffe Hall Oxford from 1989 to 1995.  He also worked for the London School of Theology.


George H. Guthrie (PhD, Southwestern Baptist Theological Seminary) serves as the Benjamin W. Perry Professor of Bible at Union University in Jackson, Tennessee. As a specialist in New Testament and Greek, he is the author of numerous articles and four books including the volume Hebrews in the NIV Application Commentary series.


Daryl Charles (PhD, Westminster Theological Seminary) is the William E. Simon Visiting Fellow in Religion & Public Life in the James Madison Program at Princeton University. Tom Thatcher is a professor of Biblical Studies at Cincinnati Christian University. A graduate of Southern Baptist Theological Seminary (Louisville), his research interests include the Johannine Literature, Historical Jesus Studies, and methods of biblical interpretation. Tom lives with his wife, Becky, and two children, and is an ordained minister of the Christian Churches/Churches of Christ.
Alan F. Johnson (PhD, Dallas Theological Seminary) is Emeritus Professor of New Testament and Christian Ethics and Emeritus Director of the Center for Applied Christian Ethics (CACE) at Wheaton College. He is the author of commentaries on Paul’s letter to the Romans, 1 Corinthians, and Revelation and co-author with Robert Webber of What Christians Believe. He and his wife Marie reside in Warrenville, Illinois and have four daughters and nineteen grandchildren.

▼▲
I'm the author/artist and I want to review Hebrews-Revelation, Revised: The Expositor's Bible Commentary.
Back
Back