SHIPPING DELAYS & COVID-19 IMPACT - learn more
Heaven Is a World of Love: A World of Love
By: Jonathan Edwards
Stock No: WW570717 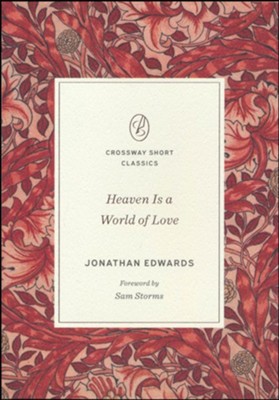 In this classic exposition of 1 Corinthians 13:8–10, Jonathan Edwards exhorts Christians to ponder the love of God—both here in the world and in expectation of heaven. The things of this world are temporary, but “love never ends” (1 Cor. 13:8). God’s love is a foretaste of future glory, made available through communion with the Holy Spirit. Each page is rich with pastoral insights that will leave readers hungry to experience more of God’s love in eager anticipation of heaven.

New England pastor Jonathan Edwards encourages Christians struggling through the imperfections of life here on earth to experience the perfect love of God in communion with the Holy Spirit.

Sam Storms (PhD, University of Texas at Dallas) has spent more than four decades in ministry as a pastor, professor, and author. He is currently the senior pastor at Bridgeway Church in Oklahoma City, Oklahoma, and was previously a visiting associate professor of theology at Wheaton College from 2000 to 2004. He is the founder of Enjoying God Ministries and blogs regularly at SamStorms.com.