Skip to main content
SPRING CYBER SALE: The sale you've been waiting for! Up to 85% off through 5/25>
Heaven Is for Real: A Little Boy's Astounding Story of His Trip to Heaven and Back
By: Todd Burpo, Lynn Vincent
Stock No: WW946158 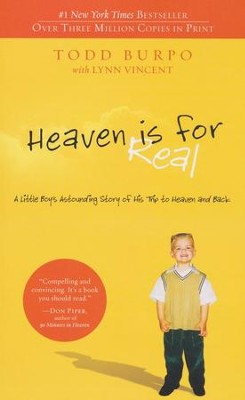 Heaven Is for Real: A Little Boy's Astounding Story of His Trip to Heaven and Back

▼▲
Is there life after death? Just ask 4-year-old Colton, who emerged from life-threatening surgery with astounding details about heaven! Colton's account includes floating away, looking down on his dad praying in the hospital, seeing God's throne, and meeting relatives---including his sister who died in a miscarriage (and whom his parents had never mentioned). Riveting! 163 pages, softcover from Nelson.

#1 New York Times best-seller with more than 11 million copies sold and Amazon’s #17 best-selling book of all time. Heaven Is for Real was the best-selling non-fiction book of 2011 as reported by Nielsen’s Bookscan, and was developed as a major motion picture by Sony in 2014.

"Do you remember the hospital, Colton?" Sonja said. "Yes, mommy, I remember," he said. "That’s where the angels sang to me."

When Colton Burpo made it through an emergency appendectomy, his family was overjoyed at his miraculous survival. What they weren’t expecting, though, was the story that emerged in the months that followed—a story as beautiful as it was extraordinary, detailing their little boy’s trip to heaven and back.

Colton, not yet four years old, told his parents he left his body during the surgery–and authenticated that claim by describing exactly what his parents were doing in another part of the hospital while he was being operated on. He talked of visiting heaven and relayed stories told to him by people he met there whom he had never met in life, sharing events that happened even before he was born. He also astonished his parents with descriptions and obscure details about heaven that matched the Bible exactly, though he had not yet learned to read.

With disarming innocence and the plainspoken boldness of a child, Colton tells of meeting long-departed family members. He describes Jesus, the angels, how "really, really big" God is, and how much God loves us. Retold by his father, but using Colton’s uniquely simple words, Heaven Is for Real offers a glimpse of the world that awaits us, where as Colton says, "Nobody is old and nobody wears glasses."

Heaven Is for Real will forever change the way you think of eternity, offering the chance to see, and believe, like a child.

Continue the Burpo’ s story in Heaven Changes Everything: The Rest of Our Story. Heaven Is for Real also is available in Spanish, El cielo es real.

Todd Burpo is pastor of Crossroads Wesleyan and a volunteer fireman. He and his wife, Sonja, have four children: Colton is an active teenager; he has an older sister, Cassie; a younger brother, Colby; and a very special sister he met in heaven. Sonja Burpo is a busy mom and pastor's wife. A certified elementary teacher, Sonja is passionate about children's ministry and helping women work through the difficulty of miscarriage.

Lynn Vincent is the New York Times best-selling writer ofHeaven Is for Real and Same Kind of Different As Me. The author or coauthor of ten books, Lynn has sold 12 million copies since 2006. She worked for eleven years as a writer and editor at the national news biweekly WORLD magazine and is a U.S. Navy veteran.

Tell us a little about yourself.  I am a pastor at Crossroads Wesleyan Church. Married 20 years to Sonja and I have 3 great children.

What was your motivation behind this project?  To share our testimony with other along with "glimpses" of heaven.

What do you hope folks will gain from this project?  God has a good plan. People to have hope of heaven, healing through their hurts and renewed faith in Jesus.

How were you personally impacted by working on this project?  God blessed us with great people to work with like Lynn Vincent, Alive Communication-Joel, Thomas Nelson-Debbie & Stephanie along with other great people at Thomas Nelson.

Anything else you'd like readers / listeners to know:  That Heaven is for Real.... and you are going to like it.

Q: I was wondering if the coming war that Todd thinks is Armageddon happens during his normal lifetime or long afterward? It wasn't clear to me if Colton was seeing this from heaven (perhaps after the rapture) during Todd's lifetime?? or if it occurs a long long time in the future after Todd has been in heaven for a long time??

The book does not clarify or set a timeline for when "The Coming War" is supposed to take place.

Q: Why is the Spainsh version cheaper than the english version? CONFUSEd

The cost for this item is determined by the publisher.

This book is written from an adult perspective and contains scenarios that may be difficult for even a well-read 7 year-old to understand.