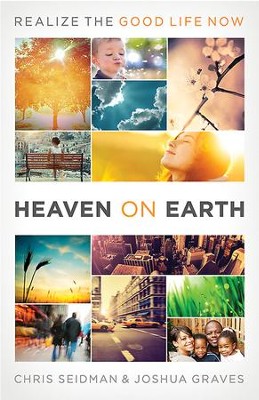 ▼▲
Heaven on Earth invites you to Jesus' way of living in the world--an invitation to the truest, deepest, most beautiful life. A short list of "blessings" called the Beattitudes form Jesus' declaration of "the good life" and provides the way and the call to immerse ourselves in it.
Heaven on Earth describes how everything changes when the life of Jesus (heaven) invades our everyday lives (earth). Ultimately, it's about the deep attainable joy that is the kingdom-of-God message of Jesus.

▼▲
So often, our view of the good life is the busy, exhausted, driven, and unhappy life. But what if there was a different way to live--now, not when we get to heaven, but now?
A short list of “blessings” called the Beatitudes is Jesus’ declaration of what “the good life” is, and an invitation to immerse ourselves in it.
If we understand the Beatitudes, we realize they are less about what we do and more about what God is doing--what God values, how He operates, and what He’s up to in our (actually His) world.
Authors Seidman and Graves offer a practical guide to changing our course to realize the good life now.

Josh Graves is the lead minister for the Otter Creek Church in Nashville, TN. He is author of The Feast: How to Serve Jesus in a Famished World (Leafwood, 2009). Josh also wrote the Study Guide for Lee Camps acclaimed Mere Discipleship (Brazos Press). Prior to moving Music City, Josh was the teaching minister for the Rochester Church and taught religion and spirituality courses for the department of religion at Rochester College (MI). Josh is currently a doctoral candidate at Columbia Seminary in Atlanta studying the relationship of postmodernism and Christian faith.  He speaks at churches and conferences regularly around the country

Joshs first book, The Feast, was written to young adults and progressive Christians in attempt to re-imagine the role of the church in a pluralistic society. The Feast responds to our hunger for a holistic spirituality that is rooted in the Jesus Story. It invites us to pull up around the table and feast on the Scripture. The Feast is a book seeking to bridge the world of reflection and practice. The chasm of belief and practice (a product of the Enlightenment and its quest for facts and objective truth) is evident even in many of todays post modern writings.

He is originally from the suburbs of Detroit (Rochester)

▼▲
I'm the author/artist and I want to review Heaven on Earth: Realizing the Good Life Now.
Back
×
Back
×