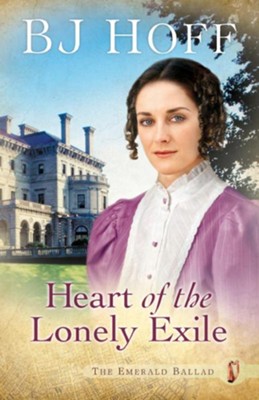 Heart of the Lonely Exile - eBook

By: B.J. Hoff
More in Emerald Ballad Series
Harvest House Publishers / 2010 / ePub
5 out of 5 stars for Heart of the Lonely Exile - eBook (5 Reviews) Write a Review
In Stock
Stock No: WW2720EB

▼▲
Michael Burke, a strong, dedicated Irish policeman, desperately wants to keep his promise to his best friend Morgan Fitzgerald to marry Nora and protect her. But Nora's instincts urge her to resist Michael's proposal and follow her heart in a different direction..More troubling still, in the midst of her personal struggle, the heartaches from her homeland continue to plague her.

In Heart of the Lonely Exile, Book Two of BJ Hoff's acclaimed and bestselling Emerald Ballad series, readers will find heroine Nora Kavanagh struggling to build a new life for herself and her son Daniel in America. With help from a wealthy American family and friendship and support from a British gentleman, Nora nevertheless finds herself caught in a conflict of the heart.

Michael Burke, a strong, dedicated Irish policeman, desperately wants to keep his promise to his best friend Morgan Fitzgerald to marry Nora and protect her. But Nora's instincts urge her to resist Michael's proposal and follow her heart in a different direction .More troubling still, in the midst of her personal struggle, the heartaches from her homeland continue to plague her.

Heart of the Lonely Exile continues the saga of the Kavanagh pilgrimage a journey of the soul in a strange new land, where all those who are exiles and aliens seek to finally find their true home.

▼▲
Nora Kavanagh, a recent Irish immigrant, is caught in a love triangle between the two men who love her and the love she has for another in BJ Hoff's latest installment of The Emerald Ballad series, Heart of the Lonely Exile. Nora along with her young son Daniel have just immigrated to the US from Ireland during the infamous Irish famine. A friend from Ireland desires her affections but so does an Englishman she has met on the journey. Nora, however, has her heart set on a certain Morgan Fitzgerald. True love prevails and so does Nora's desire to follow the Lord's plan for her life. Nora has to decide, however, which man is part of the Lord's plan.

Although the story has its interesting parts, the plotline is difficult to follow at times because of shifting locales and overlapping time sequences. Every few chapters, the point of view switches to a different character and a different setting. Several problems are presented and only a few are resolved. Even though it is intriguing, this book feels as if three different stories are being pressed together as one. The writing itself is simple and easy to read. Hoff accurately develops her characters, turning them into living, breathing people. However, the frequent plot changes can be confusing and often take away from the warmth the characters bring to the story.

One of the more memorable scenes occurs near the end of the novel. Evan, a friend from Nora's overseas voyage, must face the prospect that the Lord may be asking him to give up something he holds dear. He clumsily gets down on his knees and tells God that he will give up everything for Him. Evan remembers the story of Abraham being willing to sacrifice Isaac. This story gives him strength to give up his own desires for the will of the Lord. This scene pulls at the readers heart as Evans pain, sacrifice, and spiritual peace are clearly felt.

These characters are relatable and enjoyable. Their lives and predicaments are interesting. Nora is incredibly strong in character, but also quiet and shy. She nicely balances the bashful, stuttering Evan and the forcible Michael. There are several other characters intertwined in her life, creating a full ensemble of ideas and personalities.

Overall, this book encompasses many biblical themes, such as trusting in the Lord's timing and being willing to give up everything for Him. Jeremiah 17:7 states, "But blessed is the one who trusts in the LORD, whose confidence is in him." This is clear throughout the book as each character, especially Nora, must make a decision to trust in the Lord. Although this book is enjoyable, it does become confusing if the reader has not read the first book in the series. I would recommend this book for anybody who enjoys romance that is not evocative but, instead, focuses on the love and perfect plan of the Lord.  Elizabeth de Graaf, www.ChristianBookPreviews.com

▼▲
I'm the author/artist and I want to review Heart of the Lonely Exile - eBook.
Back
×
Back
×