Skip to main content
Get Christmas Ready Sale: Deals on over 1,150 titles thru 9/27.
Pure Heart: The Faith of a Father and Son in the War for a More Perfect Union - eBook
By: William F. Quigley
Stock No: WW88969EB 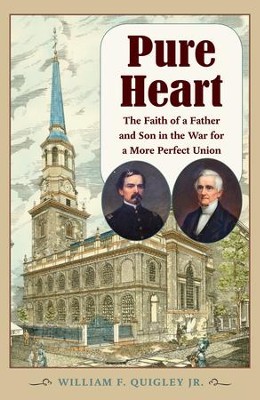 Pure Heart: The Faith of a Father and Son in the War for a More Perfect Union - eBook

In the summer of 1862, as Union morale ebbed low with home front division over war costs, coming emancipation, and demoralizing battlefield losses, 24-year-old William White Dorr enlisted as a lieu- tenant in the 121st Pennsylvania Volunteers, a new Union regiment organizing in Philadelphia. His father, the Reverend Benjamin Dorr, rector of Christ Church, Philadelphia, strived to prevent divisions in his congregation from sundering that Episcopal church historically tied to the nation’s founding.

William F. Quigley Jr. presents a narrative that remarkably encapsulates much of the North’s experience of the war. Reverend Benjamin Dorr was one of the most important clergymen of the era, who strived to hold his warring parishioners intact. His efforts paralleled Lincoln’s far greater but comparable challenge to preserve the Union. “The Nation’s Church” was torn apart from within between a faction of Pennsylvania’s leading anti-emancipation Democrats and a faction of the city’s and state’s leading Republicans. Like Lincoln, Dorr invoked a temperate faith apart from the civil religion with which most Americans crusaded against each other. Dorr prayed that war might be avoided. But, when war came, he stood faithfully in support of the Union and of the war as Lincoln waged it, emancipation included, even unto the most grievous of losses.

William White Dorr was a young officer in a storied Union infantry regiment whose brave stand at Gettysburg was pivotal in the Union’s preservation. Ten months later, wearing the second bar of an army captain, the rector’s son would lead his company once more into the Wilderness, one of the most brutal and bloody campaigns of the war.

By war’s end, many Philadelphians came to praise the spirit of charity and forgiveness exemplified by Reverend Dorr. He was their shepherd through that political, constitutional, economic, and religious crisis, and to honor his memory they erected stone monuments in “The Nation’s Church” to him and to Captain Dorr, “A Christian and a Patriot, ‘Faithful unto death.’”

Clearly and engagingly written, Pure Heart is unique in its narrative synthesis of home front political divisions and frontline infantry experiences. The emotional heart of the story lies in Reverend Dorr’s relationship with his soldier son, poignantly revealed in a recently discovered collection of his son’s wartime letters.

▼▲
I'm the author/artist and I want to review Pure Heart: The Faith of a Father and Son in the War for a More Perfect Union - eBook.
Back
Back