We are OPEN and SHIPPING - click here for shipping estimates
PRE-SUMMER CYBER SALE EXTENDED thru 6/1 ~ Over 2,500 items up to 90% off
My Heart Belongs in Galveston, Texas: Madeline's Search
By: Kathleen Y'Barbo 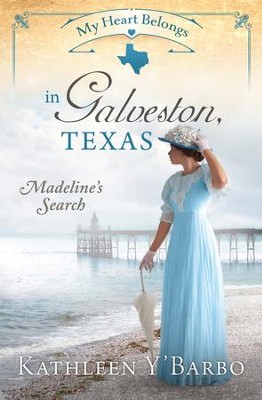 ▼▲
Journey now to Galveston, Texas, of 1880...
Where is Mrs. Smith’s granddaughter?  Who is the mysterious Mrs. Smith?

Pinkerton agent Jonah Cahill is hired by the mysterious widow to find her lost granddaughter, rumored to be living in Galveston, Texas. Though Jonah prefers to travel alone, Mrs. Smith insists that she and her companion accompany him. Madeline Latour, investigative reporter, has been acting as Mrs. Smith’s assistant for several months, and Madeline will not allow anyone—even a Pinkerton agent—to ruin the story of a lifetime. The pair forges an uneasy truce as the investigation grows dangerous.

Is there a bigger story beyond a missing girl to be revealed?

▼▲
Bestselling author Kathleen Y’Barbo is a multiple Carol Award and RITA nominee of more than eighty novels with almost two million copies in print in the US and abroad. She has been nominated for a Career Achievement Award as well a Reader’s Choice Award and is the winner of the 2014 Inspirational Romance of the Year by Romantic Times magazine. Kathleen is a paralegal, a proud military wife, and a tenth-generation Texan, who recently moved back to cheer on her beloved Texas Aggies. Connect with her through social media at www.kathleenybarbo.com.

▼▲
I'm the author/artist and I want to review My Heart Belongs in Galveston, Texas: Madeline's Search.
Back
×
Back
×