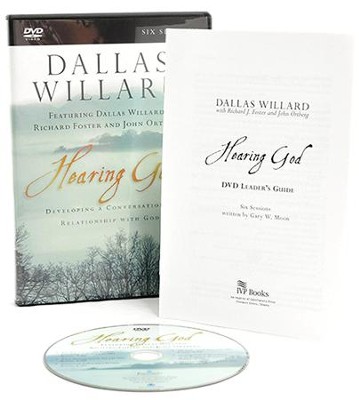 ▼▲
Communicating with God is a two-way street. It means telling him about our deepest needs and listening to him. But how can you be sure God is speaking to you? In six 30-minute DVD sessions, John Ortberg and Richard Foster dialogue with Dallas Willard about his insights and biblically based guidelines to hearing God's voice. Includes group discussion guide.

▼▲
How do we hear God's voice? How can we be sure that what we think we hear is not our own subconscious? What role does the Bible play? What if what God says to us is not clear? The key, says best-selling author Dallas Willard, is to focus not so much on individual actions and decisions as on building our personal relationship with our Creator. In this DVD you and your group can listen in as John Ortberg and Richard Foster dialogue with Dallas Willard on the themes of his beloved classic book, Hearing God. A small group discussion guide is also included, making it easy for group leaders to lead discussion after the video. Read the book together, and then bring Ortberg, Foster and Willard to your next meeting. You might be surprised at what you hear when you really start listening to God in community.

▼▲
Dallas Willard (1935-2013) was a professor in the School of Philosophy at the University of Southern California in Los Angeles for over forty years. A highly influential author and teacher, Willard was as celebrated for his enduring writings on spiritual formation as he was for his scholarship. His books include ( Book of the Year in 1998), and others. His books have received numerous Annual Book Awards and other recognitions. Willard served on the boards of the C. S. Lewis Foundation and Biola University, and was a member of numerous evaluation committees for the Western Association of Schools and Colleges. He received bachelors degrees from both Tennessee Temple College and Baylor University and a graduate degree at Baylor University, as well as a PhD from the University of Wisconsin in Philosophy and the History of Science. Richard J. Foster (D.Th.P., Fuller Theological Seminary) is founder of Renovaré in Denver, Colorado. He is the author of many books, including which has sold over two million copies worldwide, , and coauthor (with Gayle Beebe) of John Ortberg is teaching pastor of Menlo Park Presbyterian Church and author of many books, including

▼▲
"The beauty of this book is the way it exposes the reader to hearing God through obedience to him. . . . You may need, as I did, to read and read it again, but it is well worth it."
"In this volume he lays out a needed and balanced view of a God who not only listens to his children but speaks to them as well. The problem is not that God is voiceless but that we simply do not listen to his voice and that is because we don't know how to listen."
"Few books have challenged me like this one. I would urge every serious-minded Christian to read it . . . at your own risk."
"The best book on divine guidance I have ever read. I recommend it highly."
"Willard wonderfully encourages us to listen for God's voice, and then to respond and obey. This is a book of great encouragement and helpful insights into the arena of God's direction in our daily living."

▼▲
I'm the author/artist and I want to review Hearing God (DVD): Developing a Conversational Relationship with God.
Back
×
Back
×