Skip to main content
WINTER BIBLE SALE: Over 1,200 Deals Up to 80% Off, thru 2/1. Shop Now >
Do What Jesus Did: A Real-Life Field Guide to Healing the Sick, Routing Demons, and Changing Lives Forever
By: Robby Dawkins
Stock No: WW795573 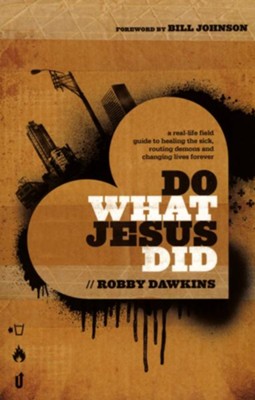 Do What Jesus Did: A Real-Life Field Guide to Healing the Sick, Routing Demons, and Changing Lives Forever

Don't get stuck at asking "What would Jesus do?" Be equipped to do it.

Chicagoland pastor Robby Dawkins hadn't moved past that question either--until he discovered that the miraculous things Jesus did during His lifetime are not just history. They're today's reality. When he started living the way Jesus did, he started living life, as he says, straight out of a superhero movie.

So can you. In this dangerous book, you'll learn simple, practical ways to take hold of your God-given "power-tools"--prophetic ministry, healing, ministering the presence of God and deliverance from demonic power. And through amazing but true stories from the front lines of ministry, you'll see what happens when ordinary Christians harness God's superpower to bring His kingdom to earth.

▼▲
A Real-Life Field Guide to Doing What Jesus Did

The things Jesus did are not just for Bible times. They are for today. For everyone. Chicagoland pastor Robby Dawkins sees this again and again in his ministry to hurting people and even to gang members. Everyday people are seeing God's power unleashed through simple faith in God's Word; they are healing the sick, routing demons, and making a dynamic impact for the Kingdom of God.

But many other believers are missing out, unaware that they have far more power and authority than they realize.

Dawkins shares dynamic, real-life instruction and amazing stories from the front lines of ministry, showing that believers carry the authority of the Son of God and the power of the Holy Spirit wherever they are. When we walk in the presence and authority of God, we will do what Jesus did.

▼▲
Robby Dawkins, born to missionary parents, knew from a young age that God had called him into ministry. He and his wife, Angie, responded to God's call to plant what is now the Vineyard Church of Aurora, Illinois, which they have pastored since 1996, and which uses power evangelism continuously. He has traveled to over 30 countries, including many Muslim nations, helping build the Church internationally. Robby and Angie have six sons and live in Aurora, Illinois.

▼▲
I'm the author/artist and I want to review Do What Jesus Did: A Real-Life Field Guide to Healing the Sick, Routing Demons, and Changing Lives Forever.
Back
Back