Shipment delay - click here for more details
Head and Heart: A History of Christianity in America - eBook
By: Garry Wills 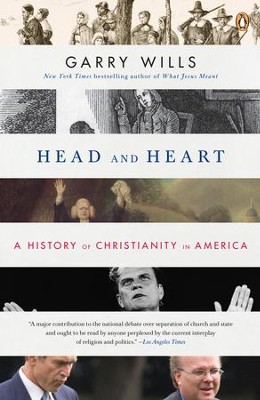 Head and Heart: A History of Christianity in America - eBook

Gary Wills has won significant acclaim for his bestselling works of religion and history. Here, for the first time, he combines both disciplines in a sweeping examination of Christianity in America throughout the last 400 years. Wills argues that the struggle now, as throughout our nation's history, is between the head and the heart, reason and emotion, enlightenment and Evangelism. A landmark volume for anyone interested in either politics or religion, Head and Heart concludes that, while religion is a fertile and enduring force in American politics, the tension between the two is necessary, inevitable, and unending.

▼▲
Garry Wills is one of the most respected writers on religion today. He is the author of Saint Augustine’s Childhood, Saint Augustine’s Memory, and Saint Augustine’s Sin, the first three volumes in this series, as well as the Penguin Lives biography Saint Augustine. His other books include "Negro President": Jefferson and the Slave Power, Why I Am a Catholic, Papal Sin, and Lincoln at Gettysburg, which won the Pulitzer Prize.

▼▲
"A major contibution to the national debate over separation of church and state and ought to be read by anyone perplexed by the current interplay of religion and politics."
--Los Angeles Times

"Challenges the conventional wisdom on many issues while synthesizing much of the finest recent scholarship."
--The New York Times Book Review

▼▲
I'm the author/artist and I want to review Head and Heart: A History of Christianity in America - eBook.
Back
×
Back
×