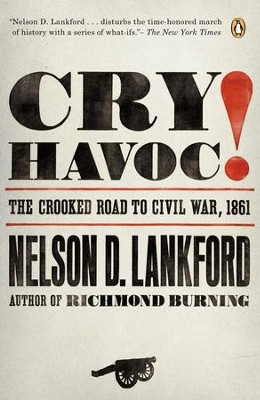 ▼▲
A "compact, engrossing narrative"* that vividly reimagines the events that led to the outbreak of the Civil War

What separates historian Nelson D. Lankford's engaging examination of the causes of the Civil War from other books on the subject is its willingness to consider the alternative possibilities to history. Cry Havoc! recounts in riveting detail the small quirks of timing, character, and place that influenced the huge trajectory of events during eight critical weeks from Lincoln's inauguration through the explosion at Fort Sumter and the embattled president's response to it. It addresses the what-ifs, the might-have-beens, and the individual personalities that played into circumstances-a chain of indecisions and miscalculations, influenced by swollen vanity and wishful thinking-that gave shape to the dreadful conflict to come.

▼▲
Nelson Lankford edits The Virginia Magazine of History and Biography, the quarterly journal of the Virginia Historical Society. A resident of Richmond, he is the co-editor of Eye of the Storm and Images from the Storm and author of The Last American Aristocrat.

▼▲
"Disturbs the time-honored march of history with a series of provocative what- ifs."
-The New York Times Book Review*

"Captures the drama and complexity of this volatile period [and] reminds readers that . . . events could have taken a different path. Anyone interested in the background of our greatest national crisis will find Cry Havoc! hugely rewarding."
-Gary W. Gallagher, author of The Confederate War