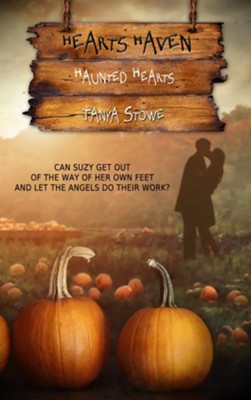 ▼▲
Firefighter Scott Lunsford is haunted by his past. Tormented by loss and reeling from guilt, he hasn't been the same since a car accident claimed his girlfriend's life. He should have saved her. With his life and his faith in ruins, he takes a leave of absence and throws himself into the renovation of his turn-of-the-century house. His days are filled with renewing and rebuilding, but the nights bring voices and apparitions and Scott fears he's losing his mind. Self-proclaimed klutz Suzy Daniels knows angels frequent her Hearts Haven home, but the entity she encounters floating around Scott Lunsford is no angel. Suzy trips on her own feet and slides down the side of the trail, screaming all the way. But Suzy realizes Scott is being tormented. She tells the handsome firefighter she's seen the apparition and assures him he's not losing his mind--he's just as sane as she is. Suzy doesn't believe in ghosts but she does believe in angels, God's spiritual warriors, and she's convinced they can help Scott in this battle for his soul.

▼▲
I'm the author/artist and I want to review Haunted Hearts (short story) - eBook.
Back
×
Back
×