The Old Man and the Harley: A Last Ride Through Our Fathers' America - eBook
By: John Newkirk 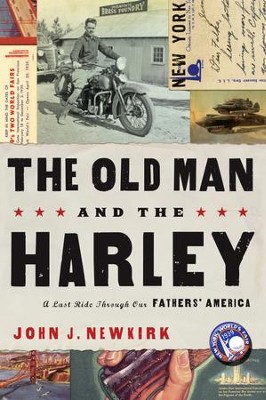 The Old Man and the Harley: A Last Ride Through Our Fathers' America - eBook

▼▲
In 1939 Jack Newkirk rode across country on his Harley Davidson VL Big Twin, from the New York World's Fair to the San Francisco Golden Gate Exposition. In The Old Man and the Harley, author John J. Newkirk paints a memorable portrait of his father Jack, and the Depression/WWII generation by retracing the journey with his father. Part history, part adventure, The Old Man and the Harley is also a poignant tribute to America's Greatest Generation.

Ride with a father and his son on an amazing journey through America's past.

In the summer of 1939, with the nation balanced between the Great Depression and the gathering winds of war, young Jack Newkirk set off on a rickety Harley to see both the New York and San Francisco World's Fairs. He had no way of knowing it was to e the autumn of his youth, and that his entire generation would soon be thrust into the most devastating conflict in history.

Seven decades later, author John J. Newkirk retraces this epic ride with his father, Jack, in a silent hope the old soldier will still be proud of the America he fought for. Each mile brings discovery as the author learns of his namesake, the heroic Squadron Leader of the legendar Flying Tigers, and of his father's life on the road and in the jungles of the South Pacific during World War II.

The result is quintessential Americana, a sweeping portrait of the grit, guts, ingenuity, and sacrifice that defined a nation, and a timely lesson from the Greatest Generation on how we can overcome our most pressing challenges and reclaim the American Dream.

▼▲
I'm the author/artist and I want to review The Old Man and the Harley: A Last Ride Through Our Fathers' America - eBook.
Back
×
Back
×