From Hardtack to Homefries: An Uncommon History of American Cooks and Meals - eBook
By: Barbara Haber 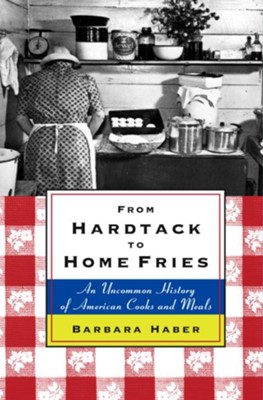 From Hardtack to Homefries: An Uncommon History of American Cooks and Meals - eBook

▼▲
Barbara Haber, one of America's most respected authorities on the history of food, has spent years excavating fascinating stories of the ways in which meals cooked and served by women have shaped American history. As any cook knows, every meal, and every diet, has a story -- whether it relates to presidents and first ladies or to the poorest of urban immigrants. From Hardtack to Home Fries brings together the best and most inspiring of those stories, from the 1840s to the present, focusing on a remarkable assembly of little-known or forgotten Americans who determined what our country ate during some of its most trying periods.

Haber's secret weapon is the cookbook. She unearths cookbooks and menus from rich and poor, urban and rural, long-past and near-present and uses them to answer some fascinating puzzles:

• Why was the food in Franklin and Eleanor Roosevelt's White House so famously bad? Were they trying to keep guests away, or did they themselves simply lack the taste to realize the truth? It turns out that Eleanor's chef wrote a cookbook, which solves the mystery.

• How did food lure settlers to the hardship of the American West? Englishman Fred Harvey's Harvey Girls tempted them with good food and good women.

• How did cooking keep alive World War II Army and Navy POWs in the Pacific? A remarkable cookbook reveals how recollections of home cooking and cooking resourcefulness helped mend bodies and spirits.

From Hardtack to Home Fries uses a light touch to survey a deeply important subject. Women's work and women's roles in America's past have not always been easy to recover. Barbara Haber shows us that a single, ubiquitous, ordinary-yet-extraordinary lens can illuminate a great deal of this other half of our past. Haber includes sample recipes and rich photographs, bringing the food of bygone eras back to life.

From Hardtack to Home Fries is a feast, and a delight.

▼▲
Barbara Haber has had a distinguished career as Curator of Books at the Schlesinger Library at Harvard University's Radcliffe Institute for Advanced Studies. Haber is a popular speaker and writer on culinary history and has been profiled in Newsweek, The New York Times, Bon Appétit, and other prominent publications. For her contributions to food and cooking, she was elected to the James Beard Foundation's Who's Who in American Food and Beverages, and given the prestigious M.F.K. Fisher Award by Les Dames d'Escoffier. She lives in Winchester, Massachusetts.

▼▲
Julia Child What a pleasure to have an illustrated peep into Amer-ican history through the treasures of the Schlesinger Library's culinary collection. Barbara Haber, the library's distinguished culinary curator, gives us here a short tour through some fascinating insights that we would most probably never have known about were it not for the cookbooks involved.
Why was the F. D. Rooseveltian food so notably bad, for instance? What about celebrity diets, Dr. Kellogg and his vegetarian and health legacy, and food reformists in general? There is the miserable life of the Irish immigrants and the veritable slave labor they performed. We see rare aspects of black history through its cooking, Jewish life through Jewish cooking. History becomes more meaningful when we can relate it to life, and food is indeed life.

▼▲
I'm the author/artist and I want to review From Hardtack to Homefries: An Uncommon History of American Cooks and Meals - eBook.
Back
×
Back
×