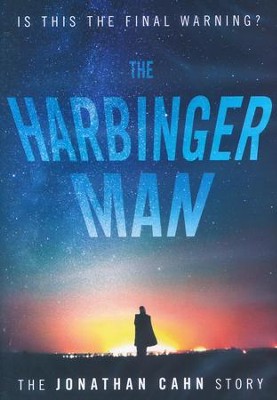 There are few books that alter the course of a nation. Rabbi Jonathan Cahn's The Harbinger is such a book. It burst onto the New York Times best-seller list in early 2012 and stayed there for more than one hundred weeks. Then Cahn did it again with The Mystery of the Shemitah, an instant bestseller in 2015.

But what of the author himself? What do we really know about him? What is the life story of Jonathan Cahn, known as "The Harbinger Man" and a Messianic Rabbi? How did Cahn rise from relative obscurity to worldwide prominence and acclaim? Raised a Reform Jew, and hardened as an atheist, why did Cahn beg God to reveal Himself by laying Cahn near death's door? Was it Cahn's wake up call to surrender to Christ? But why? For what purposes?

Now, for the first time ever in the biographical documentary, The Harbinger Man: The Jonathan Cahn Story, Rabbi Cahn reveals (in his own words) his journey from being God's enemy to becoming a close confidante. Closed-captioned. Approx. 95 minutes.

▼▲
I'm the author/artist and I want to review Harbinger Man: The Jonathan Cahn Story, DVD.
Back
Back