Skip to main content
The Harbinger: The Ancient Mystery that Holds the Secret of America's Future
By: Jonathan Cahn
Stock No: WW386108 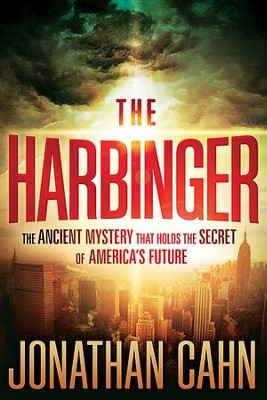 The Harbinger: The Ancient Mystery that Holds the Secret of America's Future

▼▲
NYT fiction bestseller, The Harbinger is taking the nation by storm with prophesies and signs from 9/11 and beyond, that parallel Isaiah 9. Omens from Isaiah 9 show God's anger with the people of Israel; and now, we as a nation, defy God again. How does this correlate with our future? Don't miss this extraordinary book!


7000 5-Star Reviews!
From the author that brought you The Book of Mysteries, The Mystery of the Shemitah, and The Paradigm


"Jonathan Cahn has come up with an understanding of a pattern in the Scripture for God’s judgment on ancient Israel being played out in the United States of America now. The Harbinger is the best explanation I’ve come across to understand the mystery of what’s behind 9/11, the war in Iraq, the crash of Wall Street, and much more. This end-time revelation puts him in a new category!"
—Sid Roth | Author and host of It’s Supernatural and Messianic Vision

is the most precise scriptural revelation of God’s passion for America. We must heed the warnings and turn back to the Christ who once greatly blessed America!"
—David Tyree | Former New York Giants wide receiver

Is it possible...
That there exists an ancient mystery that holds the secret of America's future?
That this mystery lies behind everything from 9/11 to the collapse of the global economy?
That ancient harbingers of judgment are now manifesting in America?
That God is sending America a prophetic message of what is yet to come?

Before its end as a nation, there appeared in ancient Israel nine specific warnings and omens of national destruction – These same nine Harbingers are now manifesting in America with profound ramifications for America’s future and end-time prophecy.

Hidden in an ancient biblical prophecy from Isaiah, the mysteries revealed in The Harbinger are so precise that they foretell recent American events down to the exact days&hellip; the 3,000-year-old mystery that revealed the exact date of the stock market collapse of 2008&hellip; the ancient prophecy that was proclaimed from the floor of the US Senate and then came true&hellip;and more. The revelations are so specific that even the most hardened skeptic will find it hard to put down. Though it sounds like the plot of a Hollywood thriller – IT’S REAL.

The prophetic mysteries are factual but revealed through a riveting narrative the reader will find hard to put down. The Harbinger opens with the appearance of a man burdened with a message he has received from a mysterious figure called The Prophet. The Prophet has given him nine seals, each containing a message about America s future. As he tells of his encounters with the Prophet, from a skyscraper in New York City, to a rural mountaintop, to Capitol Hill, to Ground Zero, the mystery behind each seal is revealed. As the story unfolds, each revelation becomes another piece in a larger and larger puzzle, the ramifications of which are, even now, altering the course of America and the world.

▼▲
NEW YORK TIMES BEST SELLING AUTHOR OF THE HARBINGER, THE MYSTERY OF THE SHEMITAH, THE BOOK OF MYSTERIES, AND THE PARADIGM WITH OVER 3 MILLION COPIES SOLD
Jonathan Cahn leads Hope of the World ministries and the Jerusalem Center/Beth Israel, a worship center made up of Jew and Gentile, people of all backgrounds, located in Wayne, New Jersey. His teachings are seen on television and radio throughout the nation and are known for their prophetic significance and their revealing of deep mysteries of God’s Word.

Q: What age would be appropriate to read or listen to this book?

This book is appropriate for older teens and adults.

▼▲
I'm the author/artist and I want to review The Harbinger: The Ancient Mystery that Holds the Secret of America's Future.
Back
Back