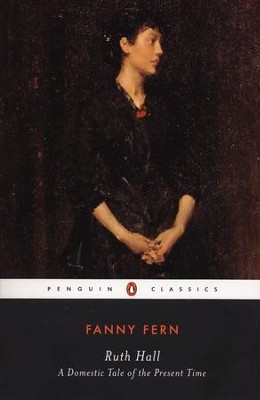 Ruth Hall: A Domestic Tale of the Present TIme - eBook

▼▲
In Ruth Hall, one of the bestselling novels of the 1850s, Fanny Fern drew heavily on her own experiences: the death of her first child and her beloved husband, a bitter estrangement from her family, and her struggle to make a living as a writer. Written as a series of short vignettes and snatches of overheard conversations, it is as unconventional in style as in substance and strikingly modern in its impact.

▼▲
Fanny Fern was born Sara Willis in 1811. She was an American newspaper columnist, humorist, novelist, and author of children's books in the 1850s through the 1870s. Fern's popularity is attributed to her conversational style that struck a chord with her intellectual female readers. Some of her published works include Ruth Hall, Fanny Ford, Rose Clark, Little Fern's for Fanny's Little Friends, The Play-Day Book, and The New Story Book for Children.

Susan Belasco is professor emerita of English and women’s studies at the University of Nebraska, Lincoln. She edited Margaret Fuller’s Summer on the Lakes and Fanny Fern’s Ruth Hall, and coedited several collections of essays and anthologies of American literature, including The Bedford Anthology of American Literature, Volumes I and II, and Leaves of Grass: The Sesquicentennial Essays.

▼▲
I'm the author/artist and I want to review Ruth Hall: A Domestic Tale of the Present TIme - eBook.
Back
×
Back
×