Skip to main content
The Books of Haggai Zechariah and Malachi: The Cambridge Bible Commentary WR
By: Rex Mason
Stock No: WW097635 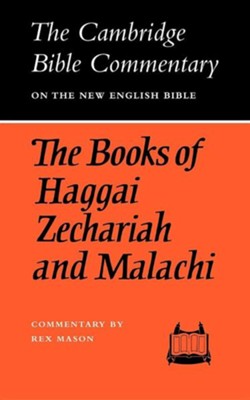 The Books of Haggai Zechariah and Malachi: The Cambridge Bible Commentary WR

▼▲
As in other volumes of the Cambridge Bible Commentary, there are introductions to the books dealt with, followed by the text of the New English Bible divided into sections. Each section of the text is followed by the commentary upon it. The preaching of the prophets Haggai and Zechariah gave a new impetus to the life of the 'remnant' of the Jewish people returned from the Babylonian exile. Haggai stresses the importance of the relationship to God of the community as a whole, while Zechariah is seen as a prophet of hope, promising Yahweh's salvation to his people. Dr Mason considers Malachi, dating perhaps from a little later than the other two, a fitting conclusion to the group of prophetic books, in that it reminds its readers of the role of the prophets in preparing the people for God's coming, that they might enjoy salvation rather than suffer punitive judgement.

▼▲
I'm the author/artist and I want to review The Books of Haggai Zechariah and Malachi: The Cambridge Bible Commentary WR.
Back