BRING CHRISTMAS HOME SALE: Save up to 85% through 11/2 >
H2O: The Novel
By: Austin W. Boyd, Brannon Hollingsworth 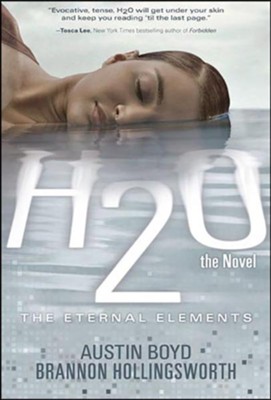 ▼▲
An up-and-coming young businesswoman, Kate Pepper seems to have it all---until her life is suddenly and strangely turned upside down. Unexplainable visions torment her every time she gets wet. Sinking into despair, Kate is frantic to avoid water at any cost. Who will save her? An allegorical story of success, sanity, and spiritual redemption. 400 pages, softcover from Living Ink.

H2O is a contemporary crossover women’s novel that tells the story of Kate Pepper, a successful young business woman in Seattle whose life is suddenly—and strangely—turned upside down. Unexplainable visions torment her every time she gets wet. Sinking into despair, frantic to avoid water at any cost, Kate ultimately finds romance and redemption through the advice of simple people who love her for who she is, not what she was.
Kate Pepper has it all . . . a razor-sharp intellect, perfect health, stunning beauty, a wildly successful career, and all the money she can spend. Or rather, she thinks she has it all.
Despite the perfect shell, there’s something dark inside Kate. Terrible visions send her into a deep depression and her world crumbles. All her business savvy and elite connections don’t make a difference; she has lost control.
Who will save her? Xavier, her predatory boyfriend? Or Candice, the Down syndrome waitress at her favorite coffee shop? At the bottom of her dark well, desperate to get out of the water, there’s nowhere to reach but up.
H2O—a fascinating allegorical look at success, sanity and spiritual redemption in a young woman’s relationship with water.

▼▲
Austin W. Boyd is an award-winning author who writes extensively about faith issues related to technology and business. He published award winning poetry and more than two dozen technical articles and papers during his career as a Navy pilot, NASA astronaut finalist, and spacecraft engineer. The author of six novels, he is a Christy Gold Medal finalist (The Proof, 2007) and the winner of the Mount Hermon "Pacesetter Award." Austin currently writes for a number of Christian publishers. He has several novels in work based on themes tied to faith dilemmas in bioethics, as well as a Christian layman’s guide to Islam. Austin is employed as the Chief Executive Officer for an engineering and design firm in Huntsville, Alabama. He is active in local ministry activities, Southwood Presbyterian Church of Huntsville, and First Baptist Church of Huntsville where he has served as a teacher, deacon, and evangelist.
Brannon Hollingsworth brings vivid writing and a voice for the Internet generation to the H2O writing team. He is a proud member of the "Wandering Men," a talented eclectic group of writers and explorers.  He has been published in several Role Playing Game (RPG) industry periodicals, including Dragon Magazine, Gaming Frontiers, and the EN World Player’s Journal, and he has edited the novel Forged by Thomas Reid. His credits with RPG publishers include: Piazo Publishing, Sword and Sorcery Studios, Green Ronin Press, Bastion Press, Sovereign Press, Atlas Games, Fantasy Flight Games, Eden Studios, Skeleton Key Games, and Ambient Inc. Brannon, his wife Heather and his five children reside in Hartselle, Alabama where he is active in church ministry activities for adults and youth. His passion for youth camps, the outdoors, and video game development make him a well-rounded dad. Brannon is employed as a Product Team Lead by SAIC, a major science and engineering firm, and he has a side business providing consultation for Internet applications, graphic design, and web development.

If water can hold truth then the latest work of speculative Christian fiction by prolific techno thriller author Austin Boyd and sci-fi author Brannon Hollingsworth is sure to open the floodgates for that genre.  H2O is a Christian Twilight Zone Episode (maybe a little Frasier thrown in as well) with all the trappings, twists and turns of a Mr. Serling plot but with 21st century characters revolving around protagonist, Kate Pepper.  We follow Kate, an independent-minded and professional young woman who is living the dream of success until a mysterious affliction turns her high-tech life into chaos.  Here the most basic of elements, water, takes her on a journey of wild fantastic visions and sweeps her into an alternate world and search for meaning.  It is first rate fantasy and storytelling. Boyd and Hollingsworth deliver their collaboration in an engaging style, spilling over with subtle irony and enough suspense that will satisfy and won't leave you thirsty.