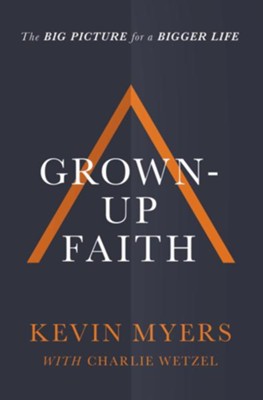 ▼▲
Find a bigger and better life by growing your faith! Myers believes we focus on developing physically, intellectually, emotionally, and financially---but let our spiritual life remain immature. This road map explains how understanding the whole context of the Bible, developing intimacy with God, and embracing holy obedience can lead to an existence beyond anything you expect. 255 pages, hardcover from Nelson.

Why isn't life everything we expected it to be? And why doesn't our faith resolve our frustrations and problems?

Kevin Myers, the founding pastor of 12Stone Church, a congregation of more than 30,000 active attenders near Atlanta, believes the reason we don't experience a transformed life is that we fail to grow up spiritually. We focus on developing physically, intellectually, emotionally, and financially, yet our faith remains immature and anemic.

In this powerful new book, Myers offers a deep yet simple roadmap to a grown-up faith through

As you understand the Bible and the big picture of God's story with humanity, you begin to find answers to life's most compelling questions. As you begin to understand God more, your longing and ability to experience spiritual intimacy with him increases, as does your desire to obey what God asks of you and your ability to follow through. This is the way to the bigger life, a life even better than you expected--or even dreamed possible.

Kevin Myers is the senior pastor of 12Stone® Church, one of the largest churches in the United States. A gifted communicator, influential leader, and strategic thinker, Kevin planted the church in 1987 and has grown it to eight campuses. Kevin mentors pastors and church planters, speaks at churches and businesses around the country, and serves on the General Board of the Wesleyan Church as well as the Wesleyan Investment Foundation (WIF), a nonprofit corporation that assists churches with capital needs. Kevin and Marcia, his wife of thirty-six years, have four children and two grandchildren.

Charlie Wetzel graduated from the University of New Orleans with a BA and an MA in English, despite growing up as a nonreader. He worked as a chef, teacher, college dean, and car salesman before becoming a full-time writer in his mid-thirties. He has written more than ninety books, mostly with leadership expert John C. Maxwell, including six New York Times bestsellers. Charlie also writes fiction. He penned The Candy Shop, a Crystal Heart award-winning short film starring Doug Jones. Charlie has been married to Stephanie for more than twenty-five years. They keep busy parenting three young adults, running, and traveling together. Charlie also enjoys cooking, gardening, reading, and training in martial arts. He insists this is the year he will finish writing his first novel!

▼▲
I'm the author/artist and I want to review Grown-up Faith.
Back
×