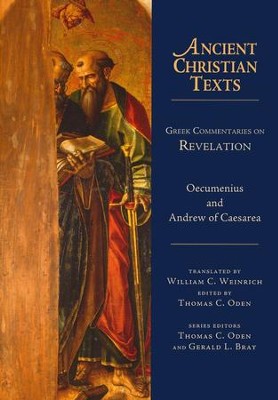 By: Oecumenius, Andrew of Caesarea, William C. Weinrich
More in Ancient Christian Texts Series
IVP Academic / 2011 / Hardcover
Write a Review
Buy 10 or more for $41.79 each.
In Stock
Stock No: WW829088

▼▲
The book of Revelation is one of the most eagerly sought after areas of study among laypeople and study groups today. But how did the church's earliest writers interpret John's Apocalypse? In this volume of the Ancient Christian Texts Series, William Weinrich translates two texts from the Christian East deriving from the early sixth century. Oecumenius of Isauria's commentary on the book comes from the Greek tradition is one of the earliest known treatments of John's vision from Patmos. Weinrich then contrasts Oecumenius' text with a second commentary written by Andrew of Caesarea, where Andrew summarizes portions of Oecumenius before offering his own contrary opinion with respect to interpretation. Together, these two ancient texts introduce readers to a little-known early dialogue on the meaning and overall significance of the book of Revelation. A noteworthy alternative to the sensationalist end-times dialogue of today.

▼▲
The Eastern church gives little evidence of particular interest in the book of Revelation. Oecumenius of Isauria's commentary on the book is the earliest full treatment in Greek and dates only from the early sixth century. Along with Oecumenius's commentary, only that of Andrew of Caesarea (dating from the same era and often summarizing Oecumenius before offering a contrary opinion) and that of Arethas of Caesarea four centuries later provide any significant commentary from within the Greek tradition. William Weinrich renders a particular service to readers interested in ancient commentary on the Apocalypse by translating in one volume the two early sixth-century commentaries. Because of the two interpreters' often differing understandings, readers are exposed not only to early dialogue on the meaning and significance of the book for the faith and life of the church, but also to breadth of interpretation within the unity of the faith the two shared.

▼▲
(D.Theol., Basel) has served as rector of the Luther Academy, theological seminary of the Evangelical Lutheran Church of Latvia, and professor of early church history and patristic studies at Concordia Theological Seminary in Fort Wayne, Indiana. He edited in the Ancient Christian Commentary on Scripture. Thomas C. Oden (19312016), was the general editor of the Ancient Christian Commentary on Scripture and the Ancient Christian Doctrine series as well as the author of , a revision of his three-volume systematic theology. He was the director of the Center for Early African Christianity at Eastern University in Pennsylvania and he served as the Henry Anson Buttz Professor of Theology at The Theological School of Drew University in Madison, New Jersey. Oden was active in the Confessing Movement in America, particularly within the United Methodist Church and was president of The Institute for Classical Christian Studies. He suggested that Christians need to rely upon the wisdom of the historical Church, particularly the early Church, rather than on modern scholarship and theology and said his mission was "to begin to prepare the postmodern Christian community for its third millennium by returning again to the careful study and respectful following of the central tradition of classical Christianity."

▼▲
I'm the author/artist and I want to review Greek Commentaries on Revelation: Ancient Christian Texts [ACT].
Back
×
Back
×