Skip to main content
CYBER WEEK SALE: Up to 88% off, thru 12/6. >
Greatest Coach Ever, The (The Heart of a Coach Series): Timeless Wisdom and Insights of John Wooden - eBook
By: Fellowship of Christian Athletes
Stock No: WW66923EB 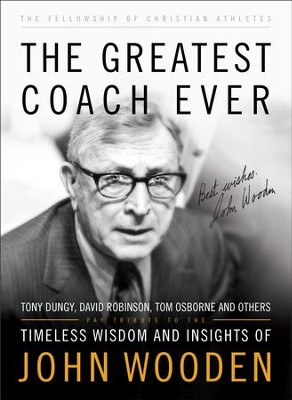 Greatest Coach Ever, The (The Heart of a Coach Series): Timeless Wisdom and Insights of John Wooden - eBook

▼▲
Coach John Wooden's teams won 10 NCAA mens basketball championships at UCLA and Sporting News magazine named him the greatest coach of all time. Yet decades after he retired and now after his passing, his wisdom, capsulated so clearly in his famous Pyramid of Success, continues to guide new generations of athletes, coaches, and people of all walks of life.

In The Greatest Coach Ever, the Fellowship of Christian Athletes features forty tributes from athletes, coaches, and other influential leaders like Bobby Bowden, Tom Osborne, Sue Semrau, Tony Dungy, Mike Singletary, Tamika Catchings, Joe Girardi, Jim Tressel, and David Robinson, paying honor to Coach Wooden and reflecting on how his example has challenged and changed them. Their stories can challenge and change your life, too.

▼▲
Since 1954, the Fellowship of Christian Athletes has challenged athletes and coaches to impact the world for Jesus Christ. FCA is cultivating Christian principles in communities throughout the world by encouraging, equipping, and empowering others to serve as examples and to make a difference. Reaching over two million people annually on the professional, college, high school, junior high, and youth levels, FCA has grown into one of the largest sports ministries. Through this shared passion for athletics and faith, lives are changed for current and future generations.

John Wooden was a high school and college coach for forty years. During that time, his teams won more than 80 percent of their games. From 1948 to 1975, his UCLA Bruins teams claimed 10 NCAA national championships, including seven in a row, and at one time won 88 consecutive games. Wooden is in the Basketball Hall of Fame, both as a player and a coach. He originated the Pyramid of Success and was the coauthor with Jay Carty of the bestseller Coach Wooden One-on-One. Wooden and his wife, Nellie, were married 53 years when she passed away in 1985. Wooden lived to be 99 years of age, passing away on June 4, 2010.

▼▲
I'm the author/artist and I want to review Greatest Coach Ever, The (The Heart of a Coach Series): Timeless Wisdom and Insights of John Wooden - eBook.
Back
Back