BIG SUMMER BLOWOUT: 3 Days Only! Save up to 90% thru Wednesday. Shop now >
Grace: Uncovered, Unfiltered, Undeserved
By: Rod Parsley 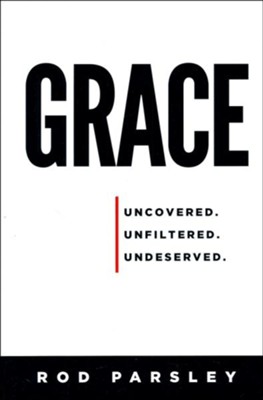 Jesus said in Matthew 5:21-22, “Ye have heard that it was said of them of old time, Thou shalt not kill; and whosoever shall kill shall be in danger of the judgment: But I say unto you, That whosoever is angry with his brother without a cause shall be in danger of the judgment” (KJV). The law said do not kill, but grace says if you hate, you’ve already committed murder. The grace of God provided for us to fulfill and exceed the law, by the sacrifice of Jesus Christ on the cross, is a powerful gift given to us as believers operating in the new covenant.

▼▲
From New York Times best selling author of Culturally Incorrect and The Finale: One World, One Ruler, One Reign

SEEK TRUTH IN A GENERATION GIVEN TO EXTREMES

TODAY’S CHURCH IS TORN in their understanding of God’s grace. Some churches measure holiness by the length of hems, cuffs, and other manmade regulations. Other churches use God’s grace as a license to disregard the Bible’s teachings on holy living and, consequently, live a life of rebellion. Neither extreme is biblical.

It’s true that Christians are freed from the rule of law. Yet it is also true that the law is a revelation of God’s will. How can we lead godly lives and also avoid turning moral absolutes into a legalistic system for salvation? In Grace, Rod Parsley uncovers the tension surrounding conversations about grace so that you can:


We aren’t trying to win a debate. We aren’t talking about what we are free to do and what we are free not to do. We are all undeserving. Uncovering the truth about grace means preparing yourself for the presence of God around you. Learn how to govern your ways so the glory of God may reside within you.

▼▲
ROD PARSLEY is the author of more than seventy books, including his New York Times best seller, Culturally Incorrect, and his most recent, The Finale: One World, One Ruler, One Reign. He is an international speaker, a frequent guest on numerous media outlets, and the host of the daily television broadcast Breakthrough With Rod Parsley, viewed by millions worldwide. He is the founder and senior pastor of World Harvest Church, a thriving multicampus church headquartered in Columbus, Ohio. He has founded and oversees various ministries, including Valor Christian College, Bridge of Hope missions, and City Harvest Network. The roles closest to his heart are those of husband to Joni and father to their adult children, Ashton and Austin.

▼▲
I'm the author/artist and I want to review Grace: Uncovered, Unfiltered, Undeserved.
Back
×
Back
×