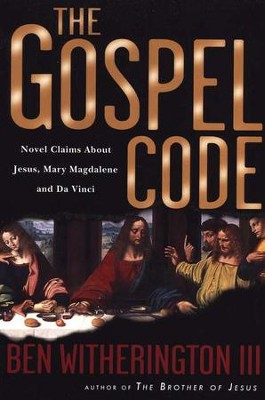 ▼▲
Blurring the line between fact and fiction, Dan Brown's The Da Vinci Code raises a controversial question. Did the early church suppress ancient documents revealing long-buried secrets about Jesus? Witherington takes you back to the time following Christ's death to reveal what we can really know about Jesus, Mary Magdalene, the canonical Gospels, and their Gnostic rivals. 252 pages, softcover from InterVarsity.

▼▲
Dan Brown's international bestseller The Da Vinci Code has raised many questions in the minds of readers. The Da Vinci Code, in blurring the lines between fact and fiction, popularizes the speculations and contentions of numerous more serious books that are also attracting wide attention. How should we respond to claims that we now have documents that reveal secrets about Jesus, secrets long suppressed by the church and other religious institutions? Do these new documents successfully debunk traditional views about Jesus and early Christianity? Ben Witherington III confronts these claims with the sure-footedness of a New Testament scholar, yet in the plain language that any interested reader can follow. He takes us back to the early centuries after Jesus' death and tells us what we can really know about Jesus, Mary Magdalene, the canonical Gospels and their Gnostic rivals.

▼▲
Ben Witherington III (PhD, University of Durham) is Jean R. Amos Professor of New Testament for Doctoral Studies at Asbury Theological Seminary. A prominent evangelical scholar, he is also on the doctoral faculty at St. Andrews University in Scotland. Witherington has written over forty books, including and both of which were selected as top biblical studies works by His other works include , , , and commentaries on the entire New Testament. He also writes for many church and scholarly publications and is a frequent contributor to and . Witherington is an elected member of the prestigious Studiorum Novi Testamenti Societas, a society dedicated to New Testament studies. He is a John Wesley Fellow for Life, a research fellow at Cambridge University and a member of numerous professional organizations, including the Society of Biblical Literature, Society for the Study of the New Testament and the Institute for Biblical Research. He previously taught at institutions like Ashland Theological Seminary, Vanderbilt University, Duke Divinity School and Gordon-Conwell Theological Seminary. An ordained pastor in the United Methodist Church and a popular lecturer, Witherington has presented seminars for churches, colleges and biblical meetings around the world. He has led numerous study tours through the lands of the Bible and is known for bringing the text to life through incisive historical and cultural analysis. Along with many interviews on radio and television networks across the country, Witherington has been seen in programs such as , , and the Peter Jennings ABC special .

▼▲
"Here's a much-needed antidote to the history-twisting misinformation that, unfortunately, has seeped into popular culture in recent years. Thanks, Ben, for setting the record straight!"
Witherington's The Gospel Code is a welcome response to this runaway phenomenon. Witherington shows time and again why Brown's "novel claims" find so little support in sober scholarship. Here are superb introductions to the New Testament data and to the Gnostic and other post-Biblcal literature. Witherington does an excellent job of clarifying the truth with strong historical and textual support.
"Other publishers have already offered Da Vinci responses. Still, this more extensive, reasoned treatment may have the staying power that other instant books lack."
"Ben Witherington won't stop at refuting the historical errors of The Da Vinci Code. He will not rest until he refutes the novel's spiritual error as well. Witherington names the narcissism at the heart of the Gnostic revival and offers the New Testament's God-centered good news in its place."
"Unlike so many critiques that carefully mince words, Ben Witherington explains exactly why currently popular attempts to treat the historical Jesus in a revisionist manner are so wide of the mark. Beginning with a bang by noting 'seven deadly errors' right on through the conclusion, Witherington pulls no punches while showcasing his wonderful sense of humor. Here the reader is treated to an excellent evaluation, making points that many of us wish were made far more frequently. This book is simply a delightful read."
"In these few pages, an eminent New Testament scholar not only explodes the follies of The Da Vinci Code but also dissects the claims of certain scholars to find in the Gnostic Gospels a historically authentic Jesus and an alternative Christianity. Timely and compelling!"

▼▲
I'm the author/artist and I want to review The Gospel Code: Novel Claims About Jesus, Mary Magdalene, and Da Vinci.
Back
Back