Skip to main content
BRING CHRISTMAS HOME SALE: Save up to 85% through 11/2 >
The Gospel According to Tolkien: Visions of the Kingdom in Middle-earth
By: Ralph C. Wood
Stock No: WW226108 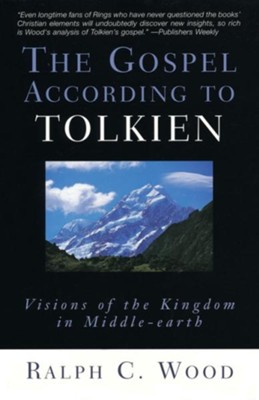 The Gospel According to Tolkien: Visions of the Kingdom in Middle-earth

▼▲
The Lord of the Rings is the touchstone modern but its Christian underpinnings have at times been . Wood fully reveals Tolkien's sacramental themes: hope can be found in the midst of despair, charity can overcome vengeance, and faith can spring out of weakness. 184 pages, softcover.

Readers have repeatedly called The Lord of the Rings the most important book of our age--absorbing all 1,500 of its pages with an almost fanatical interest and seeing the Peter Jackson movies in unprecedented numbers. Readers from ages 8 to 80 keep turning to Tolkien because here, in this magical kingdom, they are immersed in depth after depth of significance and meaning--perceiving the Hope that can be found amidst despair, the Charity that overcomes vengeance, and the Faith that springs from the strange power of weakness. The Gospel According to Tolkien examines biblical and Christian themes that are found in the works of J. R. R. Tolkien. Follow Ralph Wood as he takes us through the theological depths of Tolkien's literary legacy.

▼▲
Ralph C. Wood is Professor of Theology and Literature at Baylor University in Waco, Texas. He is the author of several books.

▼▲
Now brought to the big screen, J.R.R. Tolkien's three-volume fantasy novel has been continuously popular since its original publication in 1954. A devout Catholic, the Oxford don was at the same time enamored of the ancient Norse pagan tales. While many see the trilogy as simply a pagan story with little or no hint of Christianity, both of these authors argue that the book has a very definite Christian message-a message that Tolkien himself said was fundamental to the work. Wood's (religion, Baylor Univ.) book, which comes from the publisher of several other "Gospel According to" books, argues that Tolkien's is a deeply Christian work, but since Tolkien disliked allegory, the Christian message is seen in the plot and the imagery. He finds in the story portrayals of the traditional Christian virtues of faith, hope, and love and offers a "theological reflection" on the epic, concentrating particularly on the question of evil. Dickerson (English, Middlebury Coll.; The Finnsburg Encounter) takes a somewhat less religious approach, focusing more on the moral dimensions of the story and the idea of free will. He argues that Tolkien's interest is in showing that moral victory is more important than military victory and that the novel's greatest heroes are those who remain true to their calling, not those who win battles. He deals with the question of religion only at the end. Both authors consider book and film, and both have a more ecumenical perspective than does Bradley Birzer in J.R.R. Tolkien's Sanctifying Myth, which takes a more Catholic approach. Given what is sure to be a renewed interest in Tolkien's epic, both would be worthwhile purchases for all libraries.-Augustine J. Curley, Newark Abbey, NJ Copyright 2003 Reed Business Information.

▼▲
Readers and fans of J.R.R. Tolkien have long been aware of the Christian underpinnings of The Lord of the Rings trilogy. Still, Tolkien has not been without his religious critics, including those who have read a fascination with paganism into the pre-Christian world of Tolkien's creation. Wood, a professor of theology and literature at Baylor University, responds to those critics with an academically sound retort of "Nonsense!" Acknowledging straight off that Rings is devoid of any traces of "formal religion," Wood offers countless pieces of evidence that support his analysis of the full-fledged, deeply Christian theology of the mythological culture of Middle-earth. And he does so convincingly. Even longtime fans of Rings who have never questioned the books' Christian elements will undoubtedly discover new insights, so rich is Wood's analysis of Tolkien's gospel. But be forewarned: This is not a book for the casual reader. Rather, it is a somewhat scholarly endeavor for those who want a more thorough understanding of the underlying themes that have made The Lord of the Rings novels, as well as Tolkien's other writings, such enduring treasures. Wood teases out those themes-life and death, good and evil, courage and cowardice, mercy and justice and of course, faith, hope, and love-to reveal the faith-filled nature of Tolkien's theocentric and sacramental, albeit fictional, world. (Oct.) Copyright 2003 Reed Business Information.

▼▲
I'm the author/artist and I want to review The Gospel According to Tolkien: Visions of the Kingdom in Middle-earth.
Back
Back