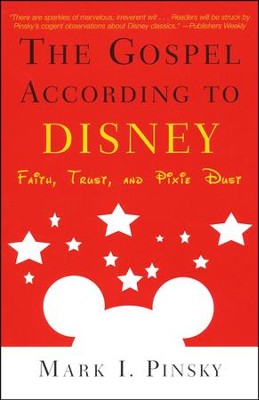 The Gospel According to Disney: Faith, Trust, and Pixie Dust

▼▲
In this follow-up to his best-selling The Gospel According to The Simpsons: The Spiritual Life of the World's Most Animated Family, religion journalist Mark Pinsky explores the role that animated features of The Walt Disney Company have played in the moral and spiritual development of generations of children. Pinsky explores the religious, moral and theological themes in thirty one of the most popular Disney films, including Snow White, Cinderella, Beauty and The Beast, and The Lion King, and discovers what he calls the Disney Gospel: faith that good will prevail, trust in yourself and your friends, and a little bit of something magical. Pinsky also looks at recent Disney developments, including the 1990s boycott of Disney by the Southern Baptist Convention, the impact of the theme parks on American culture, and the role that Michael Eisner has played in the resurgence of the company since the mid 1980s.

In this follow-up to his bestselling The Gospel According to The Simpsons: The Spiritual Life of the World's Most Animated Family, religion journalist Mark Pinsky explores the role that the animated features of Walt Disney played on the moral and spiritual development of generations of children. Pinsky explores thirty-one of the most popular Disney films, as well as recent developments such as the 1990s boycott of Disney by the Southern Baptist Convention and the role that Michael Eisner and Jeffrey Katzenberg played in the resurgance of the company since the mid-1980s.

▼▲
This is a comprehensive and quite readable account of the Disney Corporation in its entirety how the company began (including a brief history of Walt and Roy Disney's family), its later and current leaders (Michael Eisner and Jeffrey Katzenberg), and critiques of 31 individual Disney films. Pinsky (The Gospel According to the Simpsons) also discusses how Disney, both the man and the corporation, influenced American culture and offers opinions from many political and religious leaders on whether Disney truly reflects America's widespread Judeo-Christian background and the current political and cultural clout of the Bible Belt. Pinsky, who draws on his up-close-and-personal knowledge of religious opinion from a range of Jews, Protestants, and Catholics, seems to feel that Disney really espouses no specific religious or cultural stances, although groups on both the left and the right would presumably beg to differ. Each reader can decide. The chapter titled "The Baptist Boycott" is particularly well done and contains enough fodder for another entire book. For public libraries. Mary Prokop, Savannah Country Day Sch., GA Copyright 2004 Reed Business Information.

▼▲
Pinsky, Orlando journalist and author of The Gospel According to the Simpsons, sets his sights on a larger, yet more elusive target: the Magic Kingdom. As Pinsky argues, Disney's cultural influence is enormous: "millions of children around the world know much of what they do about the practical application of right and wrong from Disney." The "Disney gospel" is simple enough in outline: believe in yourself, never give up, good will be rewarded and evil punished. Unfortunately, the book bogs down amidst the massive Disney canon; and organizing it in "episode guide" format, rather than thematically, does not help. There are sparkles of marvelous, irreverent wit: "Tinker Bell, it is immediately apparent, has undergone some alterations over the decades, including breast reduction surgery and liposuction on her derriere." But for long stretches, the critical tone turns sober, even snarky, as Pinsky picks off obvious targets such as Snow White's passivity or Mowgli's haircut rather than surfacing the hidden spiritual gems he found so often in The Simpsons. Even considering the variety of Disney creations, he seems torn between admiring "Walt's dream, to communicate lessons to children across cultures," and debunking its "uplifting, family-friendly fare" as "a sentimental notion-na ve at best and disingenuous at worst." Still, readers will be struck by Pinsky's cogent observations about Disney classics. (Aug.) Copyright 2004 Reed Business Information.

▼▲
Mark Pinksy writes like the wise, witty friend who you'd like to chat with for hours about stuff that you both enjoy. That's the best way to describe his style and to explain why either of his books in this series ("Disney" or "Simpsons") are fun to read.
Among the growing list of "Gospel ..." titles, the "Disney" volume delves into probably the most powerful media influences on our own childhood and, for Baby Boomers, on our years raising children. So, Pinsky takes us through the major animated movies from "Snow White" through "Brother Bear."
Because Pinsky worked for years as Religion Writer for the Orlando Sentinel newspaper, he's also able to provide insightful chapters about the impact of Disney's changing leadership on the themes of its films -- and to point out how these themes shaped the world-famous parks.
Virtually every American adult has some personal association with Disney movies, so this book is a natural for discussion groups. And, it's loads of fun along the way.

▼▲
I'm the author/artist and I want to review The Gospel According to Disney: Faith, Trust, and Pixie Dust.
Back
Back