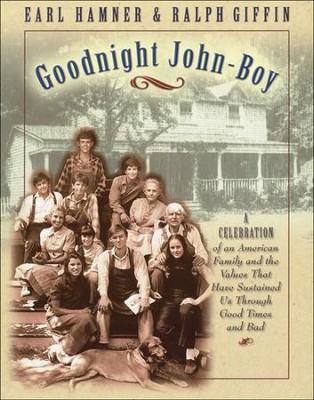 ▼▲
Earl Hamner's childhood in the Blue Ridge Mountains of Virginia inspired him to write about his family and their experiences during the Great Depression. These stories became first a novel, then two, then a theatrical film, and finally the beloved television series The Waltons. For nine years The Waltons entertained America and the world. But this television series was more than just entertainment. Each episode combined wonderful stories and "teachable moments" in which adults and children alike learned the importance of honesty, hard work, respect, responsibility, self-sacrifice, and kindness. Goodnight John-Boy is a memory book of The Waltons. Filled with behind-the-scenes stories and profiles of people who appeared or worked on the show, it introduces readers to the Hamner family members who later became characters on the show, suggests events and locales that inspired many of the episodes, and traces Earl Hamner's life as a writer from Virginia to New York to Hollywood. A comprehensive episode guide provides an invaluable resource for fans of the show. Many episodes are highlighted with anecdotes, comments, and memories from numerous people connected with the series-writers, actors, directors, producers, family, and fans. With its many photographs-from the show and from the Hamner family-Goodnight John-Boy will be treasured by millions of loyal fans.

▼▲
A memory book of "The Waltons, " the number-one television show of its time, this volume is filled with behind-the-scenes anecdotes and profiles of people who appeared on the show plus reminiscences, comments, and personal feelings from those connected with the series. Photos.

▼▲
I'm the author/artist and I want to review Goodnight, John Boy.
Back
×
Back
×