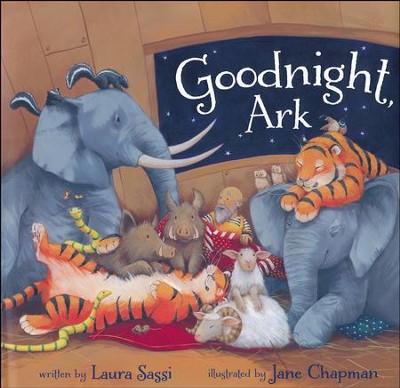 ▼▲
Discover Noah's Ark in a whole new way with this laugh out loud bedtime story! This retelling of the beloved Bible story shows what happens when all of the animals board the ship and the great storm hits---they all run scared to Noah's bed! Perfect for bedtime, each page will have kids and adults alike howling with laughter at the chaos that ensues, followed by the peaceful calm they gain from Noah's tender love.

Goodnight, Ark provides a fun bedtime story for kids, helping them settle in for the night alongside the animals on Noah’s ark as nighttime—and rain—approaches. Kids will enjoy the rhymed story where, as storm gets louder, boars, quails, elephants, snakes, and a few other furry friends join Noah in bed in search of comfort.

Author Laura Sassi brings a new dimension to one of the Bible’s most popular stories, giving a delightful glimpse into the emotional bond between Noah and the animals in his care.

And if you enjoyed Goodnight, Ark, be sure to check out Goodnight, Manger as well!

Jane Chapman is a multi award-winning artist who has illustrated over one hundred books including five New York Times bestsellers. She lives in Southern England with her husband, Tim Warnes, two children and five chickens. Visit Jane Chapman at www.ChapmanandWarnes.com.

▼▲
PreS-Gr 2–After the animals board the ark and find sleeping spots, Noah heads off for a well-deserved rest. Unfortunately, the sounds of rain, hail, lightning, and thunder wake the animals who soon seek refuge---two by two---in Noah’s bed. The patriarch doesn’t wake until the tipping ark startles the skunks, which release noxious fumes. After the excitement, Noah croons a sleepy tune to lull the restless passengers to sleep. Sassi’s bouncy verse incorporates lots of onomatopoeia for the sounds of weather and animals. The quail “Squee! Squee! Squawk!” while hail “pops” and “pings.” Minimal text per page allows Chapman plenty of space to showcase the animals’ movements. Sleepy skunks under Noah’s bed appear harmless until its collapse. Listeners will enjoy following the pairs from one illustration to the next. Despite the storm, the tone is reassuring, not frightening, making the book an obvious bedtime choice. Worthwhile companion titles include Susan Campbell Bartoletti’s soothing Naamah and the Ark at Night (Candlewick, 2011) and Sandra Boynton’s busy Going to Bed Book (Little Simon, 1982).–Kathy Piehl, Minnesota State University Library, Mankato -- School Library Journal

▼▲
I'm the author/artist and I want to review Goodnight, Ark.
Back
Back