The GodWink Effect: The Seven Secrets to Having Your Prayers Answered - eBook
By: SQuire Rushnell, Louise DuArt 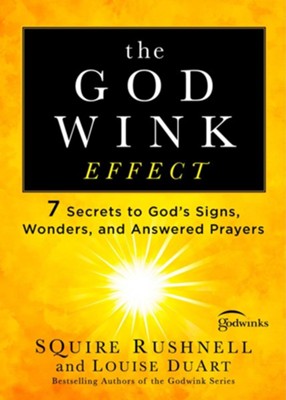 The GodWink Effect: The Seven Secrets to Having Your Prayers Answered - eBook

By: SQuire Rushnell, Louise DuArt
More in Godwink Series
Howard Books / 2017 / ePub
Write a Review
This product will be released on 01/30/20
Email me when this product is available.
Stock No: WW86723EB

▼▲
From the authors of the popular bestselling GodWink series comes an inspiring collection full of true stories about real people whose lives were changed by random, yet extraordinary encounters with others—connections that are more than just coincidence.

Prayer is a universal concept; it describes conversations between you and your creator and the outcomes from those talks are quite often incredible. Yet there is no word in the English language for “answered prayer.” Hence GodWink.

And very simply put the best way to receive a GodWink is to pray. In this book SQuire and Louise make the case that GodWinks and prayer are inextricably intertwined—you can't have one without the other.

Typical of all GodWinks books, this volume will be packed with amazing real-life stories—answered prayers experienced by people of all walks of life—reinforcing that GodWinks are like gifts left on everyone’s doorstep; just open the door and receive your gift!

▼▲
SQuire Rushnell is a popular speaker and New York Times bestselling author whose books have coined the word "GodWink," now in mainstream usage. With more than one million books in print, SQuire’s GodWink stories have become a popular monthly feature on the NBC Today show. He also appears frequently on Fox News, The Real Story with Gretchen Carlson, and Fox & Friends. As a veteran ABC Television Network executive, he led Good Morning America to the number one spot and oversaw the acclaimed Schoolhouse Rock! series and the ABC Afterschool Specials. Programs under his direction have captured more than seventy-five Emmy Awards. Louise DuArt is known as "one of the world’s best comedic impressionists" and has costarred with Tim Conway and Harvey Korman in sold-out performances for fifteen seasons. Clean and funny, Louise executes fast-paced conversations between herself and Bart Simpson, Judge Judy, Barbra Streisand, Hillary Clinton, and dozens more. A popular Women of Faith speaker, Louise has coauthored three books with her husband, SQuire. She hosted a popular daily talk show on the ABC Family channel for eight seasons, Living the Life, and has starred in various Broadway productions, garnering rave reviews.

▼▲
I'm the author/artist and I want to review The GodWink Effect: The Seven Secrets to Having Your Prayers Answered - eBook.
Back
×
Back
×