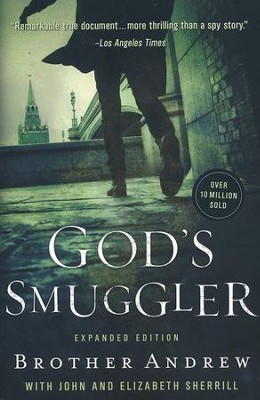 ▼▲
As a boy he dreamed of becoming a spy behind enemy lines---as a man he went undercover for God! Expanded to include a new interview with Brother Andrew, this real-life thriller tells the story of a Dutch factory worker who risked his life to smuggle Bibles behind the Iron Curtain---and found God's miraculous provision at every step. 288 pages, softcover from Chosen.

▼▲
A True-Life Thriller That Will Leave
You Breathless!


In the anniversary edition of this electrifying real-life story, readers are gripped from the first page by the harrowing account of a young man who risked his life to smuggle Bibles through the borders of closed nations. Now, sixty years after Brother Andrew first prayed for God's miracle protection, this expanded edition of a classic work encourages new readers to meet this remarkable man and his mission for the first time.

Working undercover for God, a mission that continues to this day, has made Brother Andrew one of the all-time heroes of the faith. His narrow escapes from danger to share the love of Jesus will encourage and embolden believers in their own walks of faith.

▼▲
Brother Andrew began taking Bibles to Christians behind closed borders in 1955. His ministry, which continues today, is known as Open Doors International. The author of numerous books, Brother Andrew makes his home in the Netherlands.

Elizabeth and John Sherrill
have co-authored numerous bestsellers--classics such as The Hiding Place, The Cross and the Switchblade, and God's Smuggler--and have traveled the world researching and writing articles and books. Formerly senior editors and now roving editors for Guideposts magazine, John and Elizabeth co-founded Chosen Books, along with Leonard and Catherine Marshall LeSourd. The Sherrills have three grown children, eight grandchildren, and four great-grandchildren.

▼▲
I'm the author/artist and I want to review God's Smuggler, expanded.
Back
Back