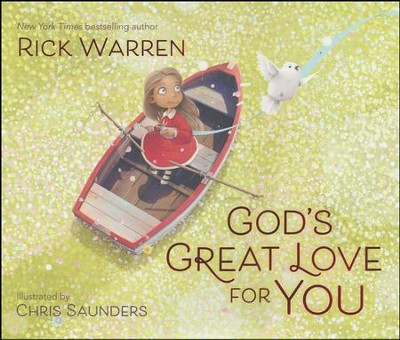 God's Great Love for You

▼▲
Taking youngsters on a whimsical and heartfelt journey to places far and near, this delightful picture book from best-selling author Warren helps 4- to 8-year-olds learn more about God. The charming illustrations and simple yet poignant text lets them know that the Lord's love is perfect---and with them wherever they go. 32 pages, hardcover from Zonderkidz.

And everything in it

God’s Great Love for You, written by #1 New York Times bestselling author and respected pastor Rick Warren, takes children on a whimsical and heartfelt journey that lets them know God’s love is with them wherever they go. With breathtaking illustrations by Chris Saunders, the simple yet poignant text comes alive as a child journeys to places far and near and discovers God’s great love is perfect, and everywhere, and will never end.

Tens of millions of copies of Pastor Rick’s books have been published in 200 languages. His best-known books, The Purpose Driven Life and The Purpose Driven Church, were named three times in national surveys of pastors (by Gallup, Barna, and Lifeway) as the two most helpful books in print.

Rick and his wife, Kay, founded Saddleback Church, the Purpose Driven Network, the PEACE Plan, and Hope for Mental Health. He is the cofounder of Celebrate Recovery with John Baker.

Pastor Rick has spoken in 165 nations. He has spoken at the United Nations, US Congress, numerous parliaments, the World Economic Forum, TED, Aspen Institute, and lectured at Oxford, Cambridge, Harvard, and other universities.

Rick is executive director of Finishing the Task, a global movement of denominations, organizations, churches, and individuals working together on the Great Commission goals of ensuring that everyone everywhere has access to a Bible, a believer, and a local body of Christ.

Chris Saunders is an award-winning illustrator who loves to tell a story. He studied illustration at the University of Northampton and did work for creative design and print companies before moving into children’s books. Chris likes to create gentle, floating, atmospheric imagery and mainly works digitally, but his pencils and watercolors are never too far away.

▼▲
In simple, lilting language, pastor and author Warren (The Purpose Driven Life) describes God’s love in comparative terms (“Deeper than all the oceans/ Higher than the moon and the stars”) and as something beyond comparison (“God’s great love for you is... perfect. / And everywhere/ And will never end”). It’s a lot to wrap one’s head around, so British illustrator Saunders introduces a wide-eyed, pug-nosed girl as a surrogate and guide. She wears a red dress with a long ribbon that unfurls behind her---a kind of spiritual contrail as she travels the world. Her only companion for most of the book is a plump white dove, but she’s never lonely or afraid, having been assured that she is one of God’s creations and that “he loves you with a great big unstoppable love.” Warren’s name will undoubtedly attract interest; the nondenominational, monotheistic language offers broad appeal; and there are some striking images, such as an ant’s-eye view of the girl in a hot-air balloon soaring above. But for the most part, the book is more pleasant than revelatory. -- Publishers Weekly

▼▲
I'm the author/artist and I want to review God's Great Love for You.
Back
Back