God's Battalions: The Case For The Crusades
By: Rodney Stark 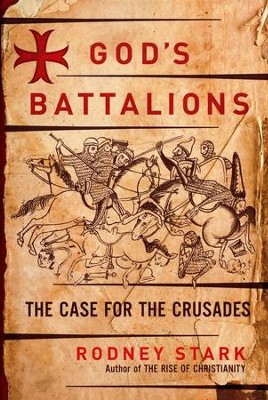 God's Battalions: The Case For The Crusades

▼▲
In God's Battalions, Rodney Stark argues that the medieval Crusades were not waged in order to gain land, steal money, or to win converts as popularly believed today. Instead, Stark suggests that the Crusades were foremost a military response to unwarranted aggression by expanding Turkish invaders. By looking at the history of the seven major Crusades from 1095 to 1291, Stark argues that the crusaders launched their campaign because of extensive Islamic provocation after centuries of repeated attempts to colonize the West. Stark presents a thought-provoking contribution to our understanding of this tumultuous period that is certain to spark debate!

▼▲
In God’s Battalions, distinguished scholar Rodney Stark puts forth a controversial argument that the Crusades were a justified war waged against Muslim terror and aggression. Stark, the author of The Rise of Christianity, reviews the history of the seven major crusades from 1095-1291 in this fascinating work of religious revisionist history.

▼▲
It always seems counterintuitive to moderns that warfare and religion can be consistent. Ideally, followers of the prince of peace are to avoid the sword and shield. Clearly, this has not always been the case. Frequently in the crosshairs of critics are the Christian wars against Muslims known as the Crusades, commonly viewed as the birth of European imperialism and the forced spread of Christianity. But what if we've had it all wrong? What if the Crusades were a justifiable response to a strong and determined foe? Stark, a prominent sociologist and author of 27 books on history and religion, has penned a compelling argument that these bloody encounters had less to do with spreading Christianity than with responding to an ever more dangerous enemythe emerging Islamic empire. There is much to be learned here. Filled with fascinating historical glimpses of monks and Templars, priests and pilgrims, kings and contemplatives, Stark pulls it all together and challenges us to reconsider our view of the Crusades. (Oct.) Copyright 2009 Reed Business Information.

▼▲
“GOD’S BATTALIONS launches a frontal assault on the comfortable myths that scholars have popularized about the crusades. The results are startling. His greatest achievement is to make us see the crusaders on their own terms.”
“At last, a convincing, balanced book on the Crusades, far from the recent unsophisticated and ideological diatribes against them as “A Bad Thing.” Rodney Stark demonstrates that the Crusades were neither unprovoked nor colonialist. Here is yet another rich and readable book from this thoughtful and distinguished author.”
“Stark’s wonderfully readable prose and politically incorrect conclusions... point us to the question—Will 21st-century infiltration lead to surrender or revival?—on which Europe’s future hinges.”
“[God’s Battalions] rewards a careful reading, and not only because the story itself is so gripping, with tales of courage and desperation, outsized characters, and fate of cultures hanging in the balance. …Masterful… sets the record straight.”
“[God’s Battalions] avoid[s] the black-and-white nonsense of current secular thinkers, who condemn the Crusades as part of their condemnation of the Catholic Church and of much later Western imperialism. …Stark demonstrate[s] a more sophisticated view of history, religion and culture.”
“Stark’s clear, factual narrative offers larger-than-life characters…. [his] works are an encouraging corrective to the anti-Western history routinely taught in our schools.”
“In God’s Battalions, Stark provides an account of the Crusades perfectly fitted for the Fox News audience. Clearly this is not the politically correct version of the Crusades, and that is fine: there is little that was politically correct about the Crusades in the first place.”
“In God’s Battalions Princeton sociologist of religion Rodney Stark seeks to dispel myths about the medieval Crusades and replace them with a more factual account…The historiographic arguments made by Stark regarding the antecedents and consequences of the Crusades are very convincing.”
“An excitingly readable distillation of the new, revisionist Crusades historiography.”
“There is much to be learned here. Filled with fascinating historical glimpses of monks and Templars, priests and pilgrims, kings and contemplatives, Stark pulls it all together and challenges us to reconsider our view of the Crusades.”
“[Stark’s] new book, God’s Battalions: The Case for the Crusades, gives historic and sociological evidence for a fresh assessment of the Crusades.”
“[Stark] wants to challenge the prevailing television pundit-level misunderstanding of the Crusades, and in this, his accessible, enjoyably argued book succeeds.”
“Award-winning author and sociologist Rodney Stark humbly goes to war against the many politically correct myths surrounding the history of the Crusades in this well-researched and easy-to-read academic masterpiece. Stark proves himself once again as a historical myth-buster.”
“[Stark] makes the case [for the crusades] with admirable frankness and flair.”
“Rodney Stark turns what we ‘know’ about history on its head.”
“Stark’s style is clear and direct. He sets the pace of narrative masterfully...The result is a good read...Christian readers should welcome Stark’s affirmation of the best in scholarship, both old and new, and his willingness to argue a controversial position.”

▼▲
I'm the author/artist and I want to review God's Battalions: The Case For The Crusades.
Back
×
Back
×