EASTER SEASON SALE: Over 1,100 deals up to 75% off. Shop through March 30th. >
The God Who Is There, 30th Anniversary Edition
By: Francis A. Schaeffer 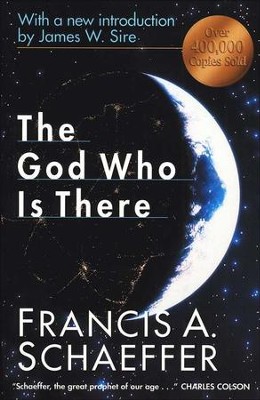 The God Who Is There, 30th Anniversary Edition

▼▲
The God Who Is There was first published in 1968. Thirty years and 400,000 copies later, its still going strong. When Francis Schaeffer wrote The God Who Is There, his analysis of society shocked the evangelical community with its clarity and understanding. Today, his words seem prophetic, as postmodernism, and its inherent relativism, have taken hold of society with a relentless grip.

The God Who Is There is a full, deep, penetrating look at society and its relation to the church (and vice versa), but it can be summarized in five basic passions, according to author and editor James Sire, in the foreword. One, a passion for the God who is there, the God who directly engages with his people. Two, a passion for truth. Schaeffer felt that the conflict seen in society stemmed from differing concepts of truth, and he calls us to return to the truth of Scripture. Three, a compassion for people. As Schaeffer states in the book, "As I push the man off his false balance, he must be able to feel that I care for him. Otherwise I will only end up destroying him..." Four, a passion for culture. Without a deep, full understanding of what the world is thinking about and chasing after, the church cannot speak the truth of the Gospel effectively to it. Five, a passion for relevant and honest communication. Schaeffer brilliantly focuses on how many in our society use words to mask the real meanings and to hide reality. He calls us to unmask the meanings, and to face reality squarely.

Thirty years ago, Schaeffer spoke out against rational humanism and relativism because they dehumanize people and because they lead to despair. And now, in a culture that prides itself on individualism and relativism, we see the continuing death of human dignity and personality that Schaeffer spoke about. The God Who Is There is at least as relevant now as when it was first published, if not more relevant. The issues first highlighted in 1968 have become much more central in our culture in the 21st century. So join with Schaeffer in calling people back to a relationship with the God who is there.

▼▲
For over thirty years The God Who Is There has been the landmark book that changed the way the church sees the world. In Francis Schaeffer's remarkable analysis, we learn where the clashing ideas about God, science, history and art came from and where they are going. Now this completely retypeset edition includes a new introduction by James W. Sire that places Schaeffer's seminal work in the context of the intellectual turbulence of the early twenty-first century. More than ever, The God Who Is There demonstrates how historic Christianity can fearlessly confront the competing philosophies of the world. The God who has always been there continues to provide the anchor of truth and the power of love to meet the world's deepest problems.

▼▲
Francis A. Schaeffer founded the L'Abri Fellowship in Switzerland and was the author of many books, including . Until his death in 1984, he was also a noted speaker with a worldwide ministry. His ministry continues through his books, with over two million copies in print.

▼▲
This classic book needs to be read by a new generation that may not know of Schaeffer, and re-read by those who have been influenced by him.
"'This book, and its companion volumes, accomplished something startling and necessary: It made intellectual history a vital part of the evangelical landscape, opening up the worlds particularly of art and philosophy to a subculture that was suspicious and ignorant of both,' writes John Stackhouse, professor of theology and culture at Regent College."

▼▲
I'm the author/artist and I want to review The God Who Is There, 30th Anniversary Edition.
Back
×
Back
×