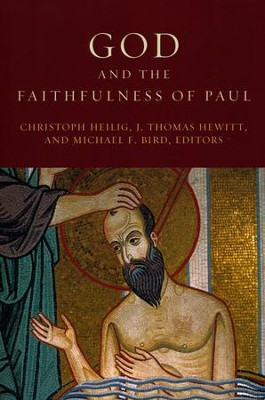 God and the Faithfulness of Paul

In this comprehensive volume, God and the aithfulness of Paul, an exceptional team of nternational scholars forwards a critical assessment of an array of issues in N.T. Wright's magnum opus Paul and he Faithfulness of God. Contributors place Wright's work in the context of other Pauline theologies, address methodological issues in his approach, and measure contextual problems, exegetical decisions, and the implications of this landmark study for the church's theology, sacraments, and mission, as well as for global responsibility in a "postmodern" age. Edited by Christoph Heilig, J. Thomas Hewitt, and Michael F. Bird, this collection of essays also includes a critical response from Wright himself./p>

N. T. Wright's magnum opus Paul and the Faithfulness of God is a landmark study on the history and thought of the apostle Paul. This volume brings together a stellar group of international scholars to critically assess an array of issues in Wright's work.

Essays in Part I set Wright in the context of other Pauline theologies. Part II addresses methodological issues in Wright's approach, including critical realism, historiography, intertextuality, and narrative. In Part III, on context, scholars measure Wright's representation of early Judaism, Greek philosophy, paganism, and the Roman Empire. Part IV turns to Wright's exegetical decisions regarding law, covenant, and election, the "New Perspective," justification and redemption, Christology, Spirit, eschatology, and ethics. Part V at last speaks to the implications of Wright's work for the church's theology, sacraments, and mission, and for global responsibility in a "postmodern" age. The volume includes a critical response from Wright himself.

Christoph Heilig teaches New Testament and coordinates doctoral studies for the theology faculty of the University of Zurich. His publications include Paul's Triumph: Reassessing 2 Corinthians 2:14 in Its Literary and Historical Context (2016), and as co-editor, God and the Faithfulness of Paul (Fortress Press, 2017).

▼▲
I'm the author/artist and I want to review God and the Faithfulness of Paul.
Back
Back