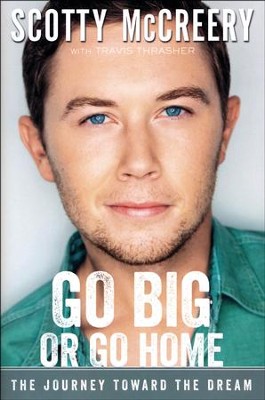 ▼▲
Go backstage with Scotty McCreery! At 21, this former American Idol winner has already sold 2.5 million albums; released two top 10 hits; and toured alongside country music superstars. Now he turns off the spotlights and shares about what inspires him, life as he chooses to live it, and the lessons he's learned so far. 240 pages, hardcover from Zondervan.

It was just a simple singing competition that would be fun to audition for. Who knew what kind of doors it might open for a sixteen-year-old from Garner, North Carolina.

Go Big or Go Home is the story of a kid with country songs in his soul. The special thing with Scotty McCreery, however, is that he has this God-given ability to sing those tunes the exact way they should be sung. Daring to enter the limelight at such a young age, Scotty finds himself embraced by the nation, and even overseas, as he competes on "American Idol". This is his journey from his North Carolina roots to winning America’s most popular singing competition and launching a musical career he had always dreamt about.

Go Big or Go Home narrates Scotty's journey from a kid imitating Elvis on the school bus to 30 million across America tuning in to see him win Season 10 of "American Idol". Now as he completes his ground-breaking fourth album, Scotty shares a glimpse of where he came from and the impact his faith, family and friends have had on a humbled guy who keeps asking "why me?"

Scotty McCreery burst onto the national music scene in 2011 at age 17, quickly establishing himself as one of country music’s hottest new stars. By age 21, the talented singer/songwriter has sold nearly 2.5 million albums and received both Platinum and Gold album certifications, debuted three consecutive albums at No. 1 on a Billboard chart, achieved three Platinum-certified singles and two Top Ten hits, toured with Brad Paisley, The Band Perry, and Rascal Flatts, headlined his own tours, earned industry and fan accolades, amassed more than three million followers on Facebook and Twitter, received more than 150 million YouTube views, and he’s just getting started!

Travis Thrasher is a bestselling author of more than 40 fiction and nonfiction books. He has written inspirational stories in a variety of genres, from love stories to supernatural thrillers, and collaborated with filmmakers, musicians, celebrities, and pastors on a variety of projects, including memoirs and novelizations. Before becoming a full-time author, Travis worked with New York Times bestselling authors for many years as the author relations manager at Tyndale House Publishers. Travis and his wife, Sharon, live in a suburb of Chicago and have three daughters.

▼▲
I'm the author/artist and I want to review Go Big or Go Home.
Back
Back