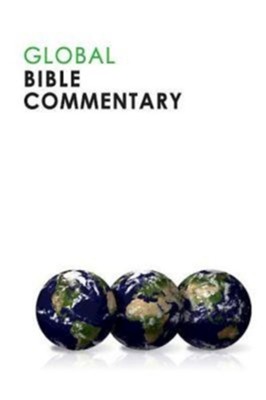 ▼▲
Gain a "worldview" on God's Word! Displaying approaches and conclusions from every point of the hermeneutical compass, this concise commentary offers a multicultural medley of biblical interpretation. Voicing their specific context and the concerns with which they read biblical texts, these diverse scholars highlight significant aspects that may be missed by readers from other cultures. 432 pages, softcover from Abingdon.

The Global Bible Commentary invites its users to expand their horizon by reading the Bible with scholars from all over the world and from different religious persuasions.  These scholars have approaches and concerns that often are poles apart.  Yet they share two basic convictions:  biblical interpretation always matters; and reading the Bible “with others” is highly rewarding.

Each of the short commentaries of the Global Bible Commentary is a readily accessible guide for reading a biblical book. Written for undergraduate and seminary students and their teachers, as well as for pastors, priests, and Adult Sunday School classes, it introduces the users to the main features of the biblical book and its content.

Yet each short commentary does more. It also brings us a precious gift, namely the opportunity of reading this biblical book as if for the first time. By making explicit the specific context and the concerns from which she/he reads the Bible, the scholar points out to us the significance of aspects of the biblical text that we simply took for granted or overlooked.

If any book demonstrates the value of cultural criticism and the importance of particularity in interpretation, this is it! Scholars from diverse social locations in every continent bring their distinctive context to bear on the act of interpreting. In so doing, they shed eye-opening light on the biblical texts. The resulting critical dialogue with the Bible exposes the oppressive as well as the liberating dynamics of the texts while at the same time showing how the Bible might address the social, political, cultural, and economic dynamics of our world today. This collection can change the way you read the Bible—scholars and students, clergy and laity alike.

Daniel Patte, Professor of New Testament and Early Christianity at Vanderbilt University, Nashville, TN, USA.  A French  Huguenot (Église Réformée de France), he taught two years in Congo-Brazzaville, and “read the Bible with” people in France, Switzerland, South Africa, Botswana, the Philippines, as well as in the USA.  His publications include books on hermeneutics and semiotics (such as Early Jewish Hermeneutics, 1975;  The Religious Dimensions of Biblical Texts, 1990); on Paul and Matthew (such as Paul's Faith and the Power of the Gospel, 1983; The Gospel according to Matthew: A Structural Commentary on Matthew's Faith, 1987), as well as, most directly related to the GBC,  Ethics of Biblical Interpretation (1995),  The Challenge of Discipleship (1999),  Reading Israel in Romans:  Legitimacy and Plausibility of Divergent Interpretations (ed. with Cristina Grenholm, 2000), The Gospel of Matthew: A Contextual Introduction (with Monya Stubbs, Justin Ukpong, and Revelation Velunta, 2003).

Rev. Dr. Nicole Wilkinson Duran, after teaching New Testament in the USA, South Africa (Zululand), in Turkey, is currently teaching part-time at Rosemont College and Villanova University, and with her husband raising twin sons in the suburbs of Philadelphia, PA.  She has published articles on topics ranging from gender and race in Esther, to the unread Bible in Toni Morrison’s novels, to body symbolism in the story of John the Baptist’s execution, and edited (with G. Phillips) Reading Communities Reading Scripture (2002).  She is an ordained Presbyterian minister and does occasional preaching and adult Christian education.

Teresa Okure, SHCJ, a graduate from the University of Ibadan, La Sorbonne, École Biblique of Jerusalem, and Fordham University (Ph.D.), is Professor of New Testament and Gender Hermeneutics at the Catholic Institute of West Africa, Port Harcourt, Nigeria. She is or has been a member of the executive committees of several associations, including EATWOT (Ecumenical Association of Third World Theologians, as Executive Secretary), the International Association for Mission Studies (IAMS), and the Society for New Testament Studies (SNTS).  She published more than 100 articles and six books including The Johannine Approach to Mission: a Contextual Study of John 4:1-42  (1988), ed. Evaluating the Inculturation of Christianity in Africa (1990) and  ed. To Cast Fire upon the Earth:  Bible and Mission.  Collaborating in Today’s Multicultural Global Context  (2000).

Archie Chi_Chung Lee,  Professor of Hebrew Bible, Department of Cultural and Religious Studies, The Chinese University of Hong Kong.  A specialist of cross-textual hermeneutics, especially Chinese text and the post-exilic biblical tradition.  He is the author of several books including A Commentary on the Book of Koheleth, (in Chinese 1990), Doing Theology with Asian Resources:  Ten Years in the Formation of Living Theology in Asia (1993, ed.) and Interpretation of the Megilloth (in Chinese 2003)  and numerous articles including  "Genesis One and the Plagues Tradition in Ps. 105," Vetus Testamentum, 40, (1990): 257-263, "Biblical Interpretation in Asian Perspective," Asia Journal of Theology, 7, (1993): 35-39, "The Chinese Creation Myth of Nu Kua and the Biblical Narrative in Genesis 1-11," Biblical Interpretation 2 (1994): 312-324,  "Cross-Textual Hermeneutics on Gospel and Culture". Asia Journal of Theology 10 (1996): 38-48 and "Biblical Interpretation of the Return in the Postcolonial Hong Kong," Biblical Interpretation,  9 (1999): 164-173.

▼▲
Daniel Patte, Professor of New Testament and Early Christianity, received a B.A. from the University of Grenoble, a B.D. from the Protestant Theological Seminary, Montpellier, a Th.M. from the University of Geneva and a Th.D. from Chicago Theological Seminary. After serving two terms as General Editor of Semeia: An Experimental Journal for Biblical Criticism of the Society of Biblical Literature, he is now on the editorial boards of The Bulletin of Contextual Theology in Southern Africa and Africa and of Chinese Christianity: An Experimental Journal of Bible, Theology and Culture. His twelve books, six edited volumes, and more than 80 articles reflect his overall quest for a "hermeneutics of moral responsibility in biblical interpretation." His interest in hermeneutics (Early Jewish Hermeneutics in Palestine) and in theories of communication, structuralism, and semiotics (three books on "Structural Exegesis") led him to pay special attention to The Religious Dimensions of Biblical Text

▼▲
I'm the author/artist and I want to review Global Bible Commentary.
Back