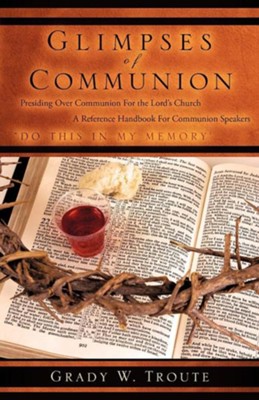 ▼▲
The author Grady W. Troute has been an elder with the Centerville Church of Christ in Centerville, Ohio, for about three decades. It has been a work of love. His roots with the church go back through his mother's side of the family to an early Arkansas pioneer, Michael Womack. Memories of Grady's youth go back to the Pleasant Home congregation, just out of Murfreesboro, Arkansas. This congregation likely resulted from from a wagon train that arrived from Tennessee in 1849. Grady lives with his wife, Sharon Shipley Troute, in Franklin, Ohio. Sharon provides inspiration to Grady. She has written several articles for the Christian Woman Magazine, and she has been a speaker at Ladies' retreats. She has been quite persuasive in insisting that this book be written. Grady's career background is mostly technical and involved both airborne and earthbound computer systems. Grady holds undergraduate and graduate degrees in Mathematics from North Texas State University. Grady has worked on the F - 111 aircraft, the Minuteman missile, the P - 3c military aircraft, the Space Shuttle, and robotics. Grady spent the last years of his career in management with General Motors and Electronic Data Systems. There was a time when Grady began to record and keep the communion comments that he made when asked to preside over the Lord's Supper. The number recorded grew and in a somewhat surprising way "fed back," influencing Grady as much or more than the audience. Cascading thoughts came, suggesting that more attention should be paid to the communion, congregations should emphasize it more, and more men should be recording their communion remarks to their congregations. Additionally, younger men should be taught. When Grady's communion themes numbered in the thirties, a book of 52 was more in reach. The author has been profoundly moved by thoughts of communion.

▼▲
I'm the author/artist and I want to review Glimpses of Communion.
Back
×