Skip to main content
BIBLE SALE OF THE SEASON: For a Limited Time ~ Save on over 1,100 Bibles!
The E-Giving Guide for Every Church: Using Digital Tools to Grow Ministry
By: Richard Rogers
Stock No: WW822575 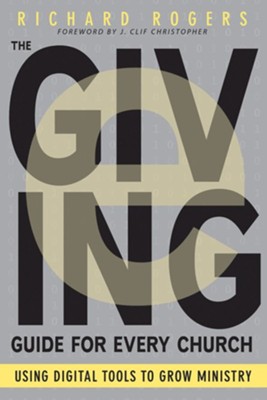 The E-Giving Guide for Every Church: Using Digital Tools to Grow Ministry

Churches that remain dependent on cash and checks to receive the offering face declining income. Reverse the trend of a shrinking budget by better using electronic media. Author Richard Rogers encourages pastors and church leaders to utilize tools already available to change the trajectory of their resourcing; because nothing is more important than what God has called them to do. The banking and electronic giving industries have not made it easy for churches to understand their services or fees. The E-Giving Guide for Every Church removes the confusion and fear and opens churches to new possibilities.

▼▲
Richard Rogers is Senior Ministry Strategist with Horizons Stewardship. He joined Horizons in 2010 after 20 years as a leader in Industry and the local church, including 9 years in management with a Fortune 500 company. He has served as Administrator and Minister of Education in a growing local church, where he oversaw a $4 million campus relocation and two subsequent building projects as well as several successful capital campaigns. Under his leadership the church's operating budget increased by 70%. Richard now partners with pastors across the country to secure resources for funding vision and growth in churches. Christopher founded the Horizons Stewardship Company in 1992 following a challenging career in pastoral ministry. He serves as the company’s CEO to this day. In his twenty years as a pastor, he led numerous major building and capital campaigns. Since founding Horizons, he and his strategists have led consultations in over 2,000 churches, conferences, synods and diocese in all phases of building, finance, and church growth raising billions of dollars for ministry. Christopher is a certified church growth consultant and has earned the coveted title CFRE (Certified Fund Raising Executive). In 1995, he was given the National Circuit Rider Award by the United Methodist Church for outstanding leadership in developing vital congregations. He has personally worked in over 42 states and is a frequent speaker at stewardship seminars around the country. He is the co-author of the book Holy Smoke, the author of Not Your Parents’

▼▲
I'm the author/artist and I want to review The E-Giving Guide for Every Church: Using Digital Tools to Grow Ministry.
Back
Back