Skip to main content
OUR BIGGEST BARGAIN SALE EVER: Over 6,000 deals at never-seen-before prices ~ through 8/23. Shop now >
Give Me This Mountain
By: Dr. Helen Roseveare
Stock No: WW501896 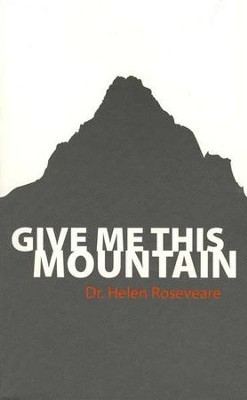 Give Me This Mountain

▼▲
Give Me This Mountain is the autobiography of Dr. Helen Roseveare, graduate in medicine from University of Cambridge in the late 1940's. A well-known missionary doctor and author, she worked in the north-eastern province of the Belgian Congo with the Heart of Africa Mission in the 1950's & 60's. She established a substantial pioneer medical service and assisted the churches before Congo's independence in 1960, and continued there for some years after, at a time when many had to flee for their lives.

Helen tells her story, from playing cricket for the ladies' university side (a liberated woman even then) to her return to Britain after five months as a hostage in rebel terrorist hands. Her candid account is an antidote to any delusion that missionaries are saints who float about an inch off the ground and see a blinding light from heaven when they receive "the call." She almost failed in missionary school. Her own admitted stubbornness, pride, know-it-all attitude, and inability to work with others made her a liability. The final decision to send her overseas came when an incident with a broken washing line proved that she at least had a sense of humour in the face of adversity!

Physical dangers and her personal ambition in the Congo often almost sank her, but her faith and hard work brought her through. Her story is one of bright mountains, conquered after experiencing the dark valleys and learning to give the glory to God.

▼▲
Helen Roseveare (1925–2016) went to the Congo as a missionary between 1953 and 1973. A pioneer of vital medical work in the rainforests of this region, she had a major impact long after she left. Through many trials, she lived out her life striving to serve her Lord with every day and encouraging those around her to do the same.

▼▲
I'm the author/artist and I want to review Give Me This Mountain.
Back
Back