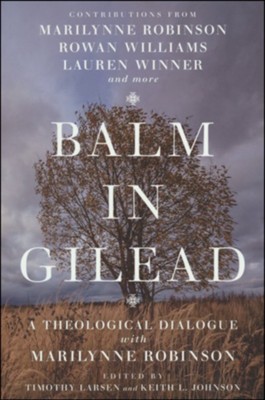 Balm in Gilead: A Theological Dialogue with Marilynne Robinson

Pulitzer Prize–winning novelist Marilynne Robinson is one of the most eminent public intellectuals in America today. In addition to literary elegance, her trilogy of novels ( Gilead, Home, and Lila) and her collections of essays offer probing meditations on the Christian faith. Many of these reflections are grounded in her belief that the sixteenth-century Protestant Reformer John Calvin still deserves a hearing in the twenty-first century.

This volume, based on the 2018 Wheaton Theology Conference, brings together the thoughts of leading theologians, historians, literary scholars, and church leaders who engaged in theological dialogue with Robinson's published work—and with the author herself.

▼▲
Timothy Larsen (PhD, University of Stirling) is McManis Professor of Christian Thought at Wheaton College. He is a fellow of the Royal Historical Society and an honorary fellow in the School of Divinity at the University of Edinburgh, and he has been a visiting fellow at Trinity College, Cambridge, and All Souls College, Oxford. He is the author of several books, including , , , , and Keith L. Johnson (PhD, Princeton Theological Seminary) is associate professor of theology at Wheaton College. He is author of and , and he is the coeditor of . Timothy George is the founding dean of Beeson Divinity School of Samford University in Birmingham, Alabama, and serves as an executive editor at He is a member of the Southern Baptist-Roman Catholic Conversation Team and has participated in the Evangelicals and Catholics Together initiative. He is the series editor for the Reformation Commentary on Scripture. Marilynne Robinson is the author of the bestselling novels , (winner of the Orange Prize), (winner of the Pulitzer Prize), and (winner of the PEN/Hemingway Award). She has also written four books of nonfiction, , , , and She teaches at the University of Iowa Writers' Workshop. Robinson has been given honorary degrees from Brown University, the University of the South, Holy Cross, Notre Dame, Amherst, Skidmore, and Oxford University. She was also elected a fellow of Mansfield College, Oxford University.

▼▲
"When I read page 128, part of the 'Space/Time/Doctrine' essay by Tiffany Eberle Kriner, I said to myself that this page was worth the price of the book. But then an essay by Rowan Williams, who I think is one of the best readers of Robinson, still lay ahead, as did the beautiful plates and accompanying essay by artist Joel Sheesley, an essay by Robinson on 'The Protestant Conscience,' and not one but two interviews, the first by Wheaton professors Vincent Bacote (theology) and Christina Bieber Lake (English) of Robinson and Williams together, and the second by Wheaton president Philip Ryken of Robinson by herself. . . . As a whole, this collection makes a strong argument for the ways that literature should enter debate about public life."

▼▲
I'm the author/artist and I want to review Balm in Gilead: A Theological Dialogue with Marilynne Robinson.
Back
×
Back
×