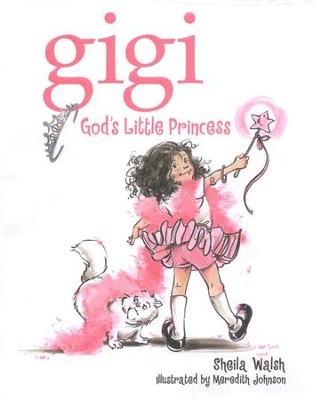 ▼▲
Introducing Gigi, an adorable, self-assured little girl who just knows she's a princess--and always has! "But where is my castle?" she wonders, "and where are my royal jewels?" Children will be thrilled to listen in as Mom and Dad explain that Gigi's not just any princess, but a daughter of the King of kings!

A wonderful discovery for little princesses everywhere, Gigi, God's Little Princess will subtly teach girls of their importance and that they belong to the King of all kings. Recommended for ages 4 to 8.

Sheila Walsh is a powerful Christian communicator who is a unique combination of singer, songwriter, author, and speaker. Formerly co-host with Pat Richardson on The 700 Club and host of her own show, Heart to Heart with Sheila Walsh, she is now a featured speaker at the Women of Faith Conferences. Sheila has created a children's project, Gnoo Zoo, to introduce children and families to God's deep love for them.

Parents and children alike will be won over by the lovable innocence of Gigi, a little girl who just knew she was a princess-she had known it from birth! But where were the castle and royal jewels? With a little help from Mommy and Daddy, Gigi realizes that she is not just any princess-she is the daughter of the greatest King of all!

A wonderful discovery for little princesses everywhere, Gigi, God's Little Princess will subtly teach girls of their importance and belonging to the King of all kings.

Sheila Walsh is a powerful communicator, Bible teacher, and bestselling author with almost six million books sold. She is the author of the award-winning Gigi, God’s Little Princess series, It’s Okay Not to Be Okay, Praying Women, Holding On When You Want to Let Go, and more. She is cohost of the inspirational talk show Life Today with James and Betty Robison, which is seen worldwide by a potential audience of over 100 million viewers. Sheila lives in Dallas, Texas, with her husband, Barry, and son, Christian, who is in graduate school.

▼▲
A girl discovers that she really is a princess-just not of the variety she had originally thought-in this perky, but ultimately hollow picture book. Gigi feels certain she's royalty, as she enjoys tea parties and all things pink and fluffy, plus her father says, "Goodnight princess, sweet dreams!" to her every evening before bed. But when Gigi asks Daddy about the princess accoutrements she expects (jewels, a crown, loyal subjects, more manageable hair), she learns the truth: "We are children of the greatest King of all... and you are his daughter too. You are God's little princess!" Unfortunately, this revelation is too long in coming in Walsh's (the Gnoo Zoo series) uneven text, which sometimes adopts a knowing, adult tone that may be off-putting to young readers. The tale ultimately comes off as an exercise in semantics: it's not clear that Gigi understands her father's explanation of her princess-dom, as she playfully wonders on the last page "just exactly when will I get my crown?" On the lighter side, Johnson's two-color art (pink and white with black outline) has the loose and breezy feel of fashion sketches, and occasionally suggests the precocious spirit of Hilary Knight's Eloise. Ages 4-7. (Mar.) Copyright 2005 Reed Business Information.

▼▲
Whats not to love about a curly-haired, freckle-faced princess with an attitude? Gigi had known from the day she was born that she was a princessalthough she wasnt exactly sure why. With no castle or royal treasures, she didnt live like a princess. She had no subjectseven her cat didnt obey her. Yet, through this little story, Gigi learns that it is not the castle or the crown that makes a princess, but the declaration of the Kingyou are Gods little princess.

This simple message of belonging to the greatest King of all was created by Christian communicator, singer, and songwriter Sheila Walsh. Pink-loving princesses will love the whimsical illustrations by Meredith Johnson. Although royals of all ages may enjoy Gigi and her quest, its simple story line is probably geared to the youngest princesses who lay in wait for a bedtime story and a sweet reminder of Gods gracious love. -- Susan Hammond, Christian Book Previews.com

▼▲
I'm the author/artist and I want to review Gigi, God's Little Princess.
Back
Back