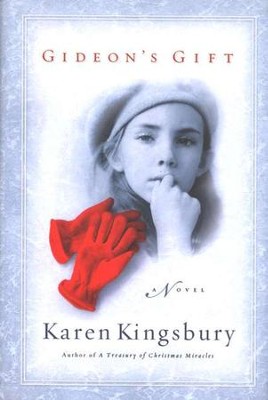 ▼▲
When Big Earl Gibson's precious wife and daughter were taken from him one Christmas long ago, he abandoned his faith and became a homeless man with an angry heart. But then a 7-year-old leukemia patient reaches out to him. Will her persistent gift of friendship help heal Earl's lonely, broken life? 160 pages, hardcover from Time Warner.

▼▲
One long-ago Christmas, Earl Gibson lost the two things most precious to him: his wife and daughter. Angry and heartbroken, he ended up living on the streets and abandoned any belief he'd once had in God.

Ten years later Big Earl meets Gideon, a seven-year-old leukemia patient who believes with all her heart that "Christmas means never having to ask God how much he loves us." Gideon is determined to reach this lonely and hurting man who hates Christmas -- and he is just as determined to rebuff her. It will take a miracle for Earl to come to understand the true meaning of Christmas. But if he can accept what Gideon wants to give him, he might find that he can return the favor with a precious gift of his own.

In Gideon's Gift, Karen Kingsbury reminds us that Christmas is still a time of miraculous possibilities if only we reach out to those around us.

▼▲
"This may be a small book, but there is nothing little about its message of hope and the miraculous. Give yourself a gift. Read GIDEON'S GIFT."—Robin Lee Hatcher, author of Firstborn


"Heartrending and gentle....This second chance for two souls will give you goose bumps. Karen Kingsbury delivers!"—Deborah Bedford, author of A Morning like This
"GIDEON'S GIFT is fabulous! It's a perfect book for the whole family."—June Cotner, author of Christmas Blessings
"With every Karen Kingsbury novel you need a box of tissues."—Patsy Clairmont, author of All Cracked Up
"Karen is a gifted writer who confronts the hard issues with truth and sensitivity."—Francine Rivers, author of Redeeming Love