BIG SUMMER BLOWOUT: 3 Days Only! Save up to 90% thru Wednesday. Shop now >
Gideon: Tuba Warrior, VeggieTales DVD
By: VeggieTales 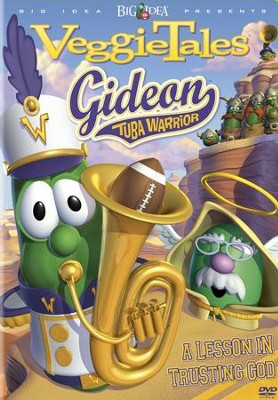 By: VeggieTales
More in VeggieTales Series
Big Idea / DVD
5 out of 5 stars (31 Reviews) Write a Review
In Stock
Stock No: WW215470

▼▲
Bob, Larry and the Veggie gang break out the band gear in this VeggieTales episode! Based on the legendary Bible story, Gideon: Tuba Warrior teaches kids a lesson about trusting in God. The Pirates Who Don't Do Anything host this incredible story of one of the greatest heroes of all time. Gideon is carefully chosen to defend his people against an undefeated army of over 30,000 excessively hairy and malevolent pickles. But when Gideon's sizable army is reduced to a mere six carrots and six peas, will he be able to defeat the dilly nemesis? Can a few good Veggies stand against an army of thousands?

What would a VeggieTales video be without another soon-to-be classic Silly Song? See what happens when Bob the Tomato is caught off-guard and thrust into a karaoke featuring "dancing hula-turtles!" Gideon: Tuba Warrior also features the heart-warming story of George Müller, a man who trusted God for everything. Starring Archibald Asparagus in the lead role, kids will see how George's unshakeable trust in God fed his entire house time and again, even when circumstances appeared to be hopeless.

▼▲
I'm the author/artist and I want to review Gideon: Tuba Warrior, VeggieTales DVD.
Back
×
Back
×