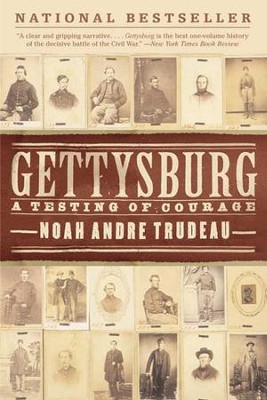 America's Civil War raged for more than four years, but it is the three days of fighting in the Pennsylvania countryside in July 1863 that continues to fascinate, appall, and inspire new generations with its unparalleled saga of sacrifice and courage. From Chancellorsville, where General Robert E. Lee launched his high-risk campaign into the North, to the Confederates' last daring and ultimately-doomed act, forever known as Pickett's Charge, the battle of Gettysburg gave the Union army a victory that turned back the boldest and perhaps greatest chance for a Southern nation.

Now acclaimed historian Noah Andre Trudeau brings the most up-to-date research available to a brilliant, sweeping, and comprehensive history of the battle of Gettysburg that sheds fresh light on virtually every aspect of it. Deftly balancing his own narrative style with revealing firsthand accounts, Trudeau brings this engrossing human tale to life as never before.

Noah Andre Trudeau is the author of Gettysburg. He has won the Civil War Round Table of New York's Fletcher Pratt Award and the Jerry Coffey Memorial Prize. A former executive producer at National Public Radio, he lives in Washington, D.C.

▼▲
I'm the author/artist and I want to review Gettysburg - eBook.
Back
×
Back
×